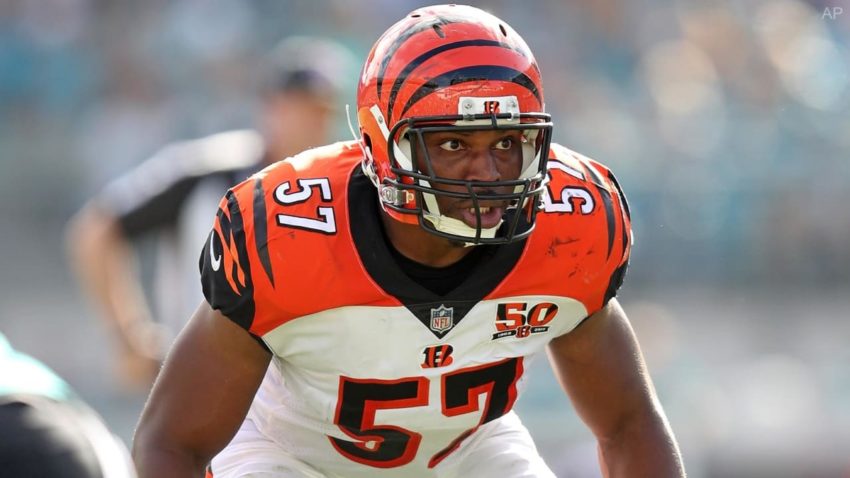 Though commencement has gone online this year, the discouraging set of circumstances certainly has not dampened the celebratory mood of the moment. One highlight of the upcoming event is the commencement speech to be delivered by Vincent Rey ’06, who played for the 2006 MAPL-winning Blue Storm football team and later the Cincinnati Bengals in the National Football League. Not only will this provide the senior class with something in which they can take pride, but it also gives members of the Mercersburg community with memories of the winning season the chance to recall Rey’s contributions to campus and the thrill of his skill on the field.

Dan Walker, history teacher and the Class of 2020 grade dean, was the head coach who led the ’06 powerhouse to victory over Mid-Atlantic Prep League rivals. Walker stated, “[Rey] came in during a special year; we had a good number of returning seniors and a group of PG’s…. At no point in the season did we ever think we were going to lose.”

There was undoubtedly no shortage of talent among the players that year, but the level of experience on the team was also exceptionally high, providing an impressive source of leadership for the younger members of the program. Rey, especially, served as a mentor to the juniors and upper-middlers, his most significant effect on the outcome of the season, according to Walker. “The biggest impact that he made was leading by example,” said Walker. Walker recalled a practice in which former teacher and coach Karl Reiser commented on Rey’s undying tenacity during sprints, in which he would regularly run himself past exhaustion. He instilled a sense of friendly competition that rubbed off on his teammates. “Everybody jumped on board with that,” Walker commented.

Rey went on to play football at Duke University, where his postgraduate experience at Mercersburg continued to exert a direct influence on his athletic performance and overall character development. Rey recalls, “[The PG year] was learning to be a grown man… it’s something different when you’re taking on responsibility away from home.” Rather than shying away from the difficulties of the transition, Rey embraced them with an open mind and a welcoming heart.

His dedication at Mercersburg paid off in the long run. Rey said, “In the NFL, you’re by yourself; you don’t have anyone telling you, ‘Hey, we need you to do well in school.’” According to Rey, learning to focus and be attentive, balancing changes to both the academic and athletic routine, separates the good football players from the great ones. As a PG, he experienced an academic challenge that forced him to get comfortable with handling ambiguity as an individual.

Music teacher Bryan Morgan ’07 followed in Rey’s footsteps at both Mercersburg and Duke. “If I didn’t attend Mercersburg, I wouldn’t have been able to go to Duke,” Morgan states. “Having the extra year before attending college, I was able to learn under Coach Dan Walker, hone my skills, and get physically and mentally stronger.”

Performance under similar circumstances allowed the two football stars to relate on an emotional level before they united as teammates. Morgan still remembers a conversation that he had with Rey during his first visit to Mercersburg in 2006, the year that the football team thrilled the community. “Immediately from that point on, I knew he was a hard worker but also a kind soul,” said Morgan. This determination combined with a caring nature rubbed off on all who had the pleasure of speaking with Rey. Morgan said, “I always looked up to him and was inspired by him for the three years we were teammates.”

Evidently, the transition from being a postgraduate at Mercersburg, to studying and playing football at Duke, and ultimately to playing linebacker for the Cincinnati Bengals was facilitated by the assets he acquired in high school. “[In the NFL] we spend more time in the classroom than we do on the field,” Rey commented. “When I show up to the stadium I have to sit in my meetings and I have to be alert and take notes.” As it turns out, playing in the NFL demands hard work in the classroom as well as on the field. Professional athletes dedicate unseen amounts of time to studying the plays and players of other teams, finding ways to outperform their opponents. “That’s competition,” Ray commented, “because if I’m not doing so, I’m going to mess up on the field or someone else could have more knowledge of the game than me.” In an industry with stiff competition, players must maintain their performance off the field in order to remain on the field.

A successful career is incomplete without risk-taking, and Rey had to take several throughout his time in the NFL. An example that immediately came to his mind was his willingness to serve as a communicator for the defense. This role called for a player to wear a radio in his helmet, allowing him to hear direct orders from the coach. “There was one player designed to have that radio on defense and I was given that role, but I also embraced it.” He stated that his job was “to dispense the information, to be a conduit from [the coaches] to the players.” Despite the distractions, especially a loud and boisterous Cincinnati crowd, Rey handled his mission with poise.

Rey’s dedication to caring for others manifested itself in his philanthropy and volunteerism to multiple charitable organizations, including the United Way, the Aruna Project, Lighthouse Youth Services, and his own REYspect Academy. This ultimately led to his recognition as a finalist in 2014 for the Walter Payton NFL Man of the Year Award, given to the player who “best represents the NFL’s commitment to philanthropy and community impact,” as well as the 2015 NFL Players Association Byron “Whizzer” White Man of the Year Award.

In football and life, Rey has lived in accordance with his beliefs: “You have to put the interests of others over those of yourself.”