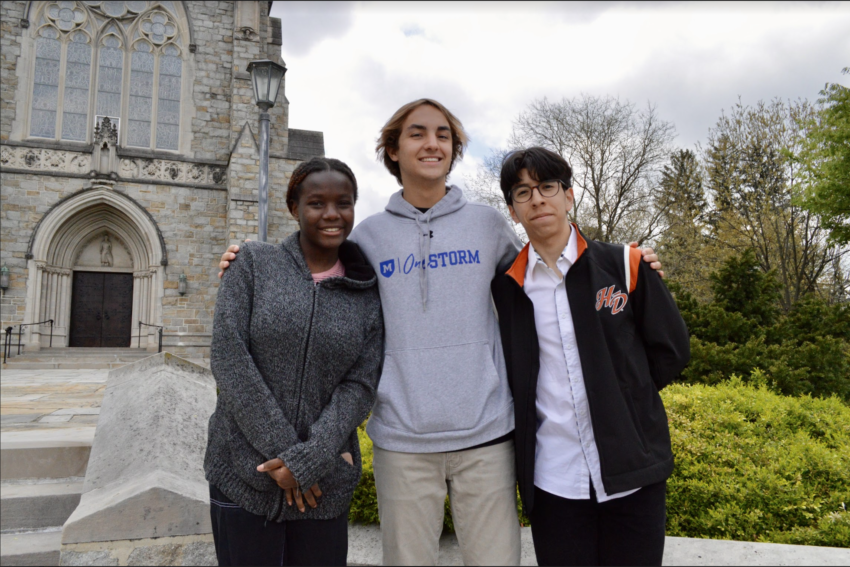 The speeches varied in format from listing promises, to poems, and even some Declamation-worthy comedy pieces.

Minh Tran ’23 promised he would “increase dorm visitation hours” and “make sure that bento boxes stay.” To wrap up his speech he jokingly said that he wanted to “take the opportunity to thank Mr. Schroer for endorsing me, my friends for believing in me, and my mom for giving birth to me.”

Mel Cort ‘23 says that they “weren’t expecting to win,” but “definitely accomplished what they wanted to do” – namely, raising awareness about issues important to students – which in the end “means more than the title ever could.”

Eventual winner Peter Rice ’23 chose an alternate strategy, handing out flyers to students before they even entered the theatre. In his speech instead of making promises he hoped to fulfill, he gave examples of things he has done previously : “raising well over a thousand dollars” with his class council when they “sold grilled cheese sandwiches.” Rice says that he hopes to make a lot of changes:  he would “like to see the wifi issue settled” along with “changes on the inter-dorm visitation rules, and keep[ing] school facilities open for more hours.”  Rice wanted to run to “continue being a part of the student council and continue trying to make the changes proposed this year actually happen.”

Kalwa Tembo ‘23, the winner of the student body vice presidential election, ran because she “wanted to be in student council to be an advocate for the people in the student body that feel like they don’t have a voice at this school” and because she remembers “seeing Aba Sanka [‘20] my freshman year in student council, and wanting to be just like her.” Tembo aspires to “to leave this school a much more open-minded place than I found it” and to put this plan into action she plans on “working closely with Dr. Renata Williams about more diverse campus programs, teaching staff, and fun activities.” Tembo wrapped it up saying that she wants to “loosen restrictions for the juniors [Upper Middlers] of the 2022-2023 school year because of their immense workload and commitments.”

It was a crowded field this year with Rice, Cort, Linden Amster ‘23, Arnav Pallapothu ‘23, Manuel Ponce ‘23, and Minh Tran ‘23 garnering votes for president. Tembo was the sole candidate, while Ponce will be the Member-at-Large, which is chosen by the Student Life Office, in the coming year.

We may never get Mercersburg-branded condoms, student government has the power to change the school for the better. Students control their future, so let’s hope that the student body has made the correct decision.