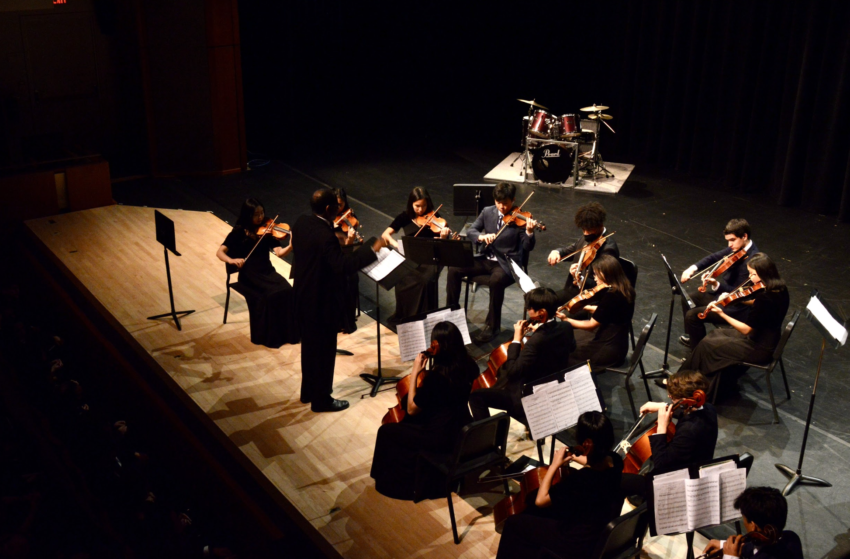 On Friday, April 22, Strings, Band, and Chorale performed in the annual Spring Concert. The music groups have all been working nonstop on their Spring line-up since early January. Chorale led the night with an explosive start, followed by Strings, and Band.

Band member and flutist Molly Willis ‘22  shared her preparation experience: “The rehearsals were pretty calm. We tended to get better quickly the more we played, so everything was way less stressful as we improved through the rehearsals. We also started some pieces before the others, so we had some pieces that we knew we were pretty good on.”

Members of the music groups dressed in semi-formal attire, some wearing suits and tuxedos, others in black floor-length gowns. The formal manner of the musicians complemented the persistent work that they put into the performance and their desire to put on a good show for their peers. Chorale member Destiny Rodney ‘22 reflecte, “I thought the performance went great! We performed better than we did at the dress rehearsal, so it was nice to see everyone so proud of the payoff of their hard work.”

Music teacher and Band and Chorale director Bryan Morgan said, “I thought everyone did a phenomenal job. The atmosphere and the feeling in the moment was superb. I am so proud of the hard work of the student musicians, tech crew, my fellow directors, and my colleagues that handled all the logistics.”

The concert ended with all three groups collaborating in the performance of the Ukrainian National Anthem, raising awareness of the war and showing support for the Ukrainian people. “It was a piece recognizing a greatly significant international conflict, and it felt the most meaningful of all the pieces in our repertoire,” Strings member Kaori Graham-Myrie ‘24 said. Those who were in the concert placed Ukrainian flag stickers over their hearts to express their support for the Ukrainian people. Strings Director Michael Cameron first read the English translations of the anthem. Then, Chorale sang the anthem in Ukrainian, with Strings and Band playing the accompaniment.

“I am really glad that we did that big performance of the Ukrainian National Anthem to conclude the evening. So wonderful and important,” said Morgan.

Cameron emphasized the spirit of music. “There was no theme. Putting a label on anything is something I will go to great lengths to avoid. I believe that Mr. Morgan, Mr. Brinson and myself simply wanted our musicians to present music that would be enjoyable to work on and enjoyable to listen to.”

Strings, Band and Chorale will be participating in the Hershey Park Music Festival on May 20, once again bringing music, our ears, and our hearts to the greater stage.