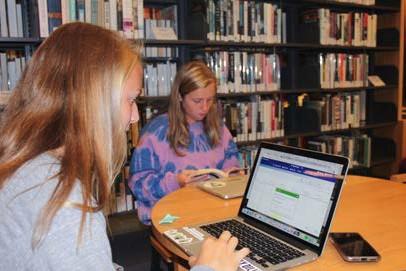 The onset of a new Mercersburg school year ushered in the latest roster of students and the age of Veracross, the school’s new information management system. Veracross replaces numerous systems that included sites and apps such as Schoology, Reach, FileMaker, and FirstClass. As returning students and faculty begin to wrestle with the new systems, the community is divided: many feel that the shift was not only warranted but long overdue, while other believe it was unnecessary and inconvenient.

The process involved in the decision to shift to an all-encompassing system was two-pronged. First, the school had to determine the need for the change in systems, and second, it had to decide which was best. “We had a myriad of different systems, and we had redundant data living in several different places,” said Julia Maurer, Associate Head of School for School Life. These systems did not talk to each other unless data was entered by hand, increasing the risk of error. “Ultimately, the security and integrity of our school and student data was at the heart of the decision. By switching to a system where we could have everything in one place, we reduced a lot of those inefficiencies,” Maurer said.

Katie Titus, Head of School, said, “We looked at multiple systems and ultimately determined Veracross as the best solution.” One of the largest draws of Veracross was that the company was willing to work with Mercersburg to tweak and customize the site to better serve the school. As teachers familiarize themselves with the program, they will be able to contribute their own input on its functioning. Eventually, teachers will even be able to communicate with the Academic Dean, Jennifer Smith, who will then communicate common concerns to Veracross through the ticket system that the platform offers.

Until then, the learning curve for the new system has been steep for many of Mercersburg’s students and staff. Miki Kato ‘20 commented, “I hate having to log in everytime I want to check my homework. I wish they had an app for it,” she said.

This frustration with Veracross’s current inconveniences extends to faculty as well. Jim Brinson, a dorm faculty member in Swank, expressed concerns about the current bugs in the system after he completed his first duty night with Veracross. Brinson ran into a multitude of challenges, such as having some of his recordings disappear or students being automatically checked in without his ever having seen them. Such difficulties make it hard to track students as they travel between the library, help centers, and dorms. In the case of a disaster, such lack of knowledge could be dangerous. It is this fact that so concerns Brinson. “All that is very frustrating,” Brinson admitted. “But I’m hoping they’re all just bugs.”

Even Maurer admits struggling with the learning curve, but she and the wider school administration remain stubbornly optimistic. “I’m still learning how to use it… I miss some aspects of Schoology but I’m finding ways to do it better or differently. The way that Schoology worked wasn’t perfect either, we were just used to it,” she said.

Titus said, “Be patient… We’ve all created work habits related to Schoology and FirstClass, and now, all of a sudden, we have to work differently…. And so it takes time and just to know that we will get there. ” Even Titus is working intimately with the new system, suffering all the same difficulties as other faculty as she has begun teaching again for the first time in several
years. She, too, is experimenting, trying to better understand and more efficiently use the system.