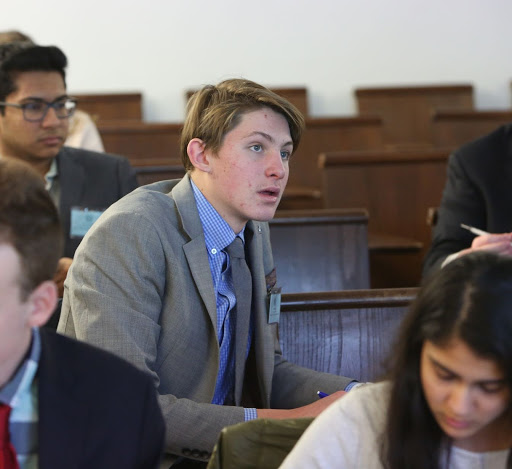 From January 15 to 17, fifteen students represented Mercersburg Academy during two virtual Model UN conferences. The first event, a Model UN Training Conference, replicated the UN General Assembly as an opportunity for high school students to negotiate policy and debate from various national positions. Participating students serve on committees as ambassadors from designated countries. This requires being able to adopt a position and work with other diplomats by forming alliances. Representatives discuss contemporary global issues that promote awareness,  decision-making, and critical thinking. Delegates followed training protocols and prepared work during winter break and in sessions with the help of Director of Global Programs Justine O’Connell, the Model UN faculty adviser.

The second conference, Columbia University Model UN Conference and Exposition featured a range of crisis committees, much smaller than the large General Assembly fora. Crisis committees re-enact either historical or fictional situations. The crisis occurs when historical events are altered by students to create opportunities for negotiation and problem solving. Avo Reid ’22, who won an Outstanding Delegate Award at Columbia, played the Soviet minister of defense in the Cuban Missile Crisis, and worked with his Russian committee to respond to the unfolding narrative. Maddy Gillner ’22 said, “I had to come up with a storyline, called a crisis arc, for the person I was representing while trying to navigate a crisis by passing directives, documents outlining the will of the group.” Gilner represented Liam Cosgrave, an Irish politician during “the Troubles,” the late twentieth century conflict between Catholics and Protestants in Northern Ireland.

Elle Cole ’24, proud recipient of the Outstanding Delegate Award in her committee, represented Vietnam at the conference and enjoyed the social aspect of the weekend: “We collaborated through breakout rooms by forming blocks with each other and coming up with ideas to write our resolution.”  Joe Zimmerman ’22 and Frances Elwood ’23 were also honored with honorable mentions at the training conference.

Many student participants as well as O’Connell were new to Model UN this year; nevertheless the differences between the virtual and in-person conferences were evident. There were obvious upsides. “The virtual format allows delegates to participate from all across the world at a much lower cost and our school can participate in more conferences per year,” O’Connell stated. The conference, however, experienced several technological glitches that interfered with the experience. Many students also noted that the virtual setting detracted from the usual joy and excitement of the event.

Veteran Dylan Gantt ’21 said, “The goal of Model UN is to advance yourself or your cause.” Model UN evokes challenging discussions that rely on both individual and group engagement.