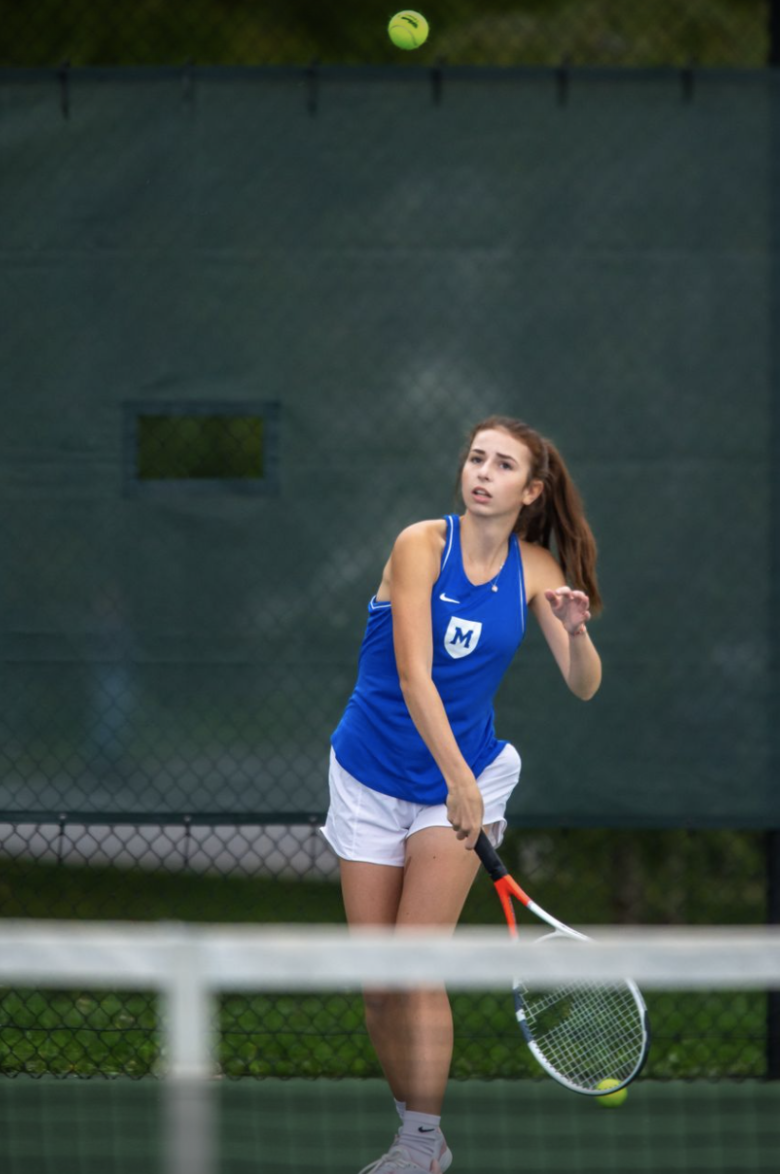 The girls tennis team reached a turning point with the beginning of the season. Interscholastic competitions started, unlike last year, when the only possible competition was the intrasquad Blue vs White matches, and the former tennis coach, Eric Hicks, left the school leaving the head coach position vacant. However, despite the few changes, the girls’ tennis team, with Mike Sweeney as the new varsity head coach and Jeff Cohen as the JV coach, made the 2021 season something to remember.

Players reported positively about the season. The team ended with a 6-5 record overall with notable wins against the Hill School, Blair Academy, and the Madeira School. The Mid-Atlantic Prep League championship that occurred last week was a valuable experience as the team picked up two MAPL victories and emerged as the only Mercersburg fall season team to win even one MAPL contest. The players praised the efforts of the two captains, Camille Smith ’22 and Izzy Jones ’22, for their role in leading the team. Day Kim ’23, said, “We all improved in every way, had a really good time playing some tennis and getting to know each other.”

Each player pointed to a different highlight of the season, but the match against Madeira seemed to be memorable for a lot of players. Hisano Enomoto ’25 said, “We swept all of them except for one. And against other schools, I assume everybody had some sort of time when they played really well and were satisfied with the result.” Jones added, “A major highlight of the season was probably our 7-0 win over Madeira. We swept them in all of the matches, four singles and three doubles.”

For some individual highlights, Arnav Pallapothu ’23, the manager of the team, pointed at Enomoto’s first game at the MAPL finals, in which she beat her opponent 8-0 in 30 to 40 minutes. Adding to that, Smith emphasized Kim’s match against Blair, in which, being down 7-2 in an 8-game pro set, made a comeback and sent the match into a tiebreaker that she finished with a magnificent overhead volley, bringing the team to victory.

Granted, the season wasn’t just an easy ride. The team experienced its share of struggles. For instance, Jones identified the lowlight of the season as the 3-4 loss against the Hun School of Princeton. “We were coming off a big win against Blair the night before, so this was a disappointing loss. It all came down to the last match playing. That final match went to a tiebreaker, but unfortunately, Hun took the win.” Moreover, some of the players had to miss matches. Number one player Hisano said, “Some of us including myself were injured throughout or in some part of the season or got into a bit of slump or lows during our matches.”

Despite the fact that the season has concluded, the future for the girls’ tennis team looks bright. The team will lose some of its brightest seniors, Smith and Jones. And, as Sweeney added, “Sitting just outside of our top 6 are players like Jaime Hyung ’23, Mogere Nyaoke ’25, Savannah Poe ’23, and Katie Himes ’23 who could make the jump into those top spots.” Kim said, “Since we had a new coach this year, we were all new to each other and a month and a half was not quite enough to get to know everyone’s weaknesses and strengths. Now that we are closer and we know our work styles, I think we can coordinate the training better to adjust to our needs and improve on our weaknesses.”