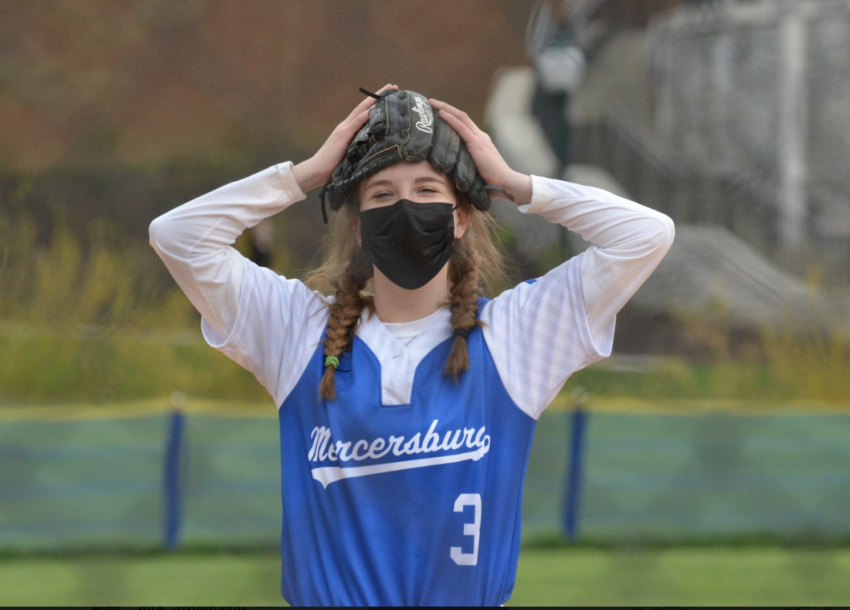 High school athletic teams depend on the experience and talent of their seniors throughout the season. Important responsibility rests upon their shoulders.If there was one athlete who carried this burden alone at Mercersburg, it was Toni Meehan ’21 of the softball team, the sole senior of the ten players on the 2021 roster. “I was honestly worried about being the only senior on the team this year, because I thought I would be in it by myself and I would have a lot on my plate. I couldn’t have been more wrong,” she said.

Meehan became the only senior on the team when the others who started with her in earlier years eventually moved onto other sports, according to softball coach Kelsey Steiner. However, she did not let this fact impact her performance as an athlete and a teammate this season. In the times of the pandemic, playing sports has been difficult, but according to Meehan, “Everyone stepped up and showed a lot of leadership.” Meehan inspired that spirit of leadership among her teammates. Head softball coach, Lauren Jacobs, said, “Toni has been a leader on and off the field this Spring. She’s done such a good job of reading the pulse of the team and being a great communicator between the coaches and the players.”

Jamie Hyung ‘23, an outfielder with Meehan this season, said, “[Toni] always motivates me to play harder.”

Along with her leadership, Meehan brought her personality to the field. Steiner said, “She’s helped develop a positive environment for everyone.”  As an athlete, Jacobs also said, “She has never given us less than 100 percent.” Hyung said, “She brings positive energy to every practice and she is an exemplary person who puts in her best effort especially when she is in the outfield.”

Part of the softball team since ninth grade, in that time Meehan has grown as a player and a person. Jacobs recalled, “We often joke with Toni about her speed and how she wasn’t always the fastest runner, but with a ton of work in the off-season and over the winter virtual term, all of Toni’s hard work really paid off as she turned into a completely different athlete from not only her freshman year, but her sophomore and junior years.”

Hyung also commented on Meehan’s speed, “I have only known her for two years, but one thing I noticed is that she has gotten so much faster.” According to Steiner, “Toni has come a long way since her freshman year. She started out in the infield but found her place as a leader in the outfield.”

Meehan reflected on years with Mercersburg softball. “My experience with the softball team has been unforgettable. Coach [Jacobs] and Coach Steiner are so understanding and kind, yet also push all of us to be the best we can be,” she said.

For her coaches, Meehan was the type of athlete that makes the difficult days worthwhile. “Since Toni joined the team as a ninth grader, she has been one the most coachable kids we’ve had. We have been so grateful for her to be in our program for four years,” Jacobs said.

Meehan is now heading to Syracuse University to pursue a major in business analytics. Though Meehan had to carry the senior leadership burden alone this season, she has impacted her teammates, coaches, and the program for years to come.