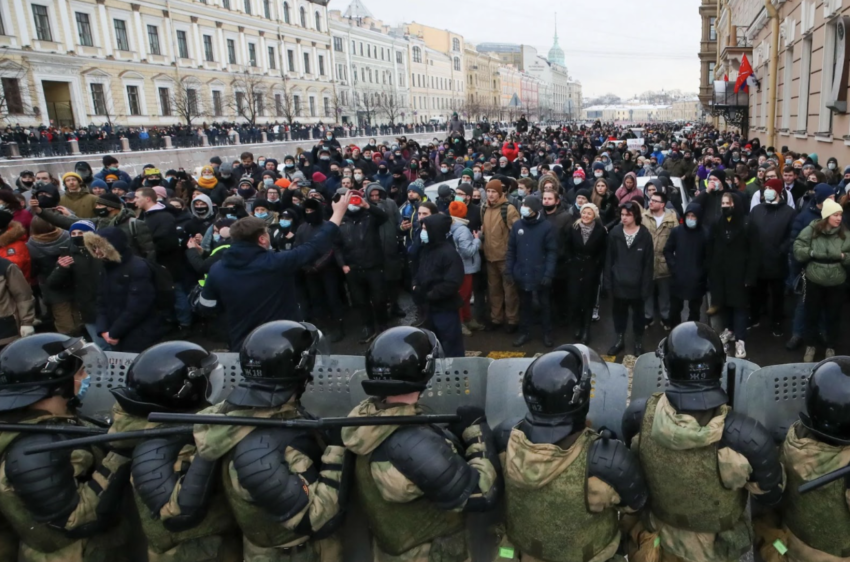 “I’m sorry, sir. Could you please show us your ID?”

Left and right, thousands of people were stopped in the streets by the Russian police. It was January 23, the first day of the “Free Navalny” protests.

Despite the warnings of the government, people were gathering in groups around Moscow subway stations (conveniently closed for “maintenance checks” just the day before) and slowly populating the city center. All over the country, students were told to either stay home or be expelled, and the same threat applied to government employees. Still, many went, and what they expected was not typical Russian police treatment – more like a performance in the best standards of American brutality. Peaceful protesters were beaten up and arrested. Minors organized camps in the malls where they would gather with food and medication to assist rioters. The rioters themselves, meanwhile, were exchanging information in the chat “Navalny’s Headquarters” on Telegram – the only messenger that is outlawed in Russia due to its refusal to sell any information about its users to the government.

Aleksei Navalny has been the only well-known opposition leader of Putin’s party United Russia for quite some time. He is the leader of the political party Future Russia and the founder of the Anti-Corruption Fund. Using his YouTube channel, Navalny posts documentaries that delve into the corruption plaguing the Russian government.

What was the reason for the sudden burst of violence? Navalny’s YouTube documentary, Putin’s Palace.

Putin’s Palace explores Putin’s early years of working in the government – in other words, back when he used to be Vlad and not Vladimir Vladimirovich Putin. What is more, it includes a tour of a 3D simulation of Putin’s mansion in southern Russia, which apparently features a casino, a hookah lounge, a theatre, and an oyster farm. Considering the minimum wage in the most expensive city of Russia, Moscow, is currently 2 dollars an hour, the striking difference between the lifestyle of the country’s ruler and its average citizen is what provoked the riots. The day before the first protest, Navalny was arrested, which only exacerbated the conflict.

Mercersburg’s Russian students have mixed feelings about this power struggle. While some were not present in Russia at the time of the protests, others witnessed it with their own eyes from the windows of their apartments. “I can’t believe people were getting arrested for this,” says an anonymous student from Russia, “I can’t believe that the police attacked those they had promised to protect in the name of a corrupt government.”

Most do not have a strong political opinion; while it is obvious that the country is suffering from corruption, deeply nationalist Navalny might not be the best presidential candidate. At the moment, everyone is waiting for a new persona – someone able to fix corruption without imposing their own jingoist view on the country.