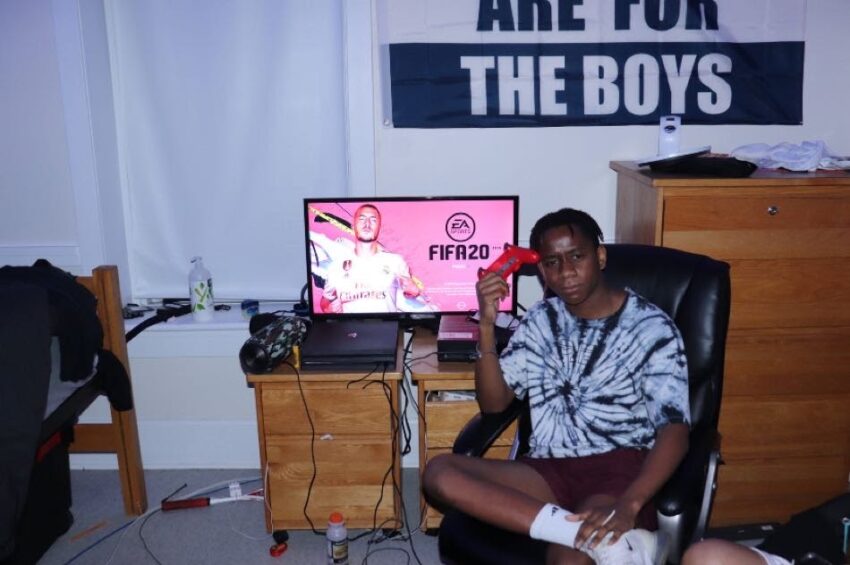 Since returning to school, especially during quarantine, many students have turned to video games while spending time in their rooms. Being that community members were restricted to their rooms except for bathroom use, the chance to explore the realm of video games grew ever more appealing. Isolated students embraced the opportunity to build connections with their friends and, in a more competitive manner, put their skills to the test in head-on matches. Despite the fact that many either lacked a console or were unable to bring theirs from home, the movement into Stage 2 of the coronavirus restrictions helped to include these students in the online gaming phenomenon. Gamers new and old enjoyed a plethora of games in the dorms, but among the most popular were EA Sports games. Two of the most relevant of these present an interface gravitating toward soccer and basketball—FIFA and NBA 2K.

Marco Malo ‘21 is hooked. A fan of both FIFA and NBA 2K, Malo says that they give him something to do when he has a lot of free time— something the whole campus has had a surplus of. He usually plays 2K after finishing his homework so as not to impact his academic life negatively. He says, “Without it [2K or FIFA], I wouldn’t know how to fill out my free time.” According to him, there are no dorm competitions in Tippetts, but he occasionally plays with his wingmates as a good way to hang out within the circle. Malo identifies the aforementioned sports games as the best of the year.

Ekow Daniels ‘21 wholeheartedly agrees with Malo, except Daniels takes a greater liking to FIFA, noting that it keeps him entertained and is a great way to spend time with friends. The online interface accommodates those that are on different floors, in different dorms, or even across the country and world, as it helps to bring physically separate groups together to play as one. As of now, Daniels claims the title of best FIFA player on campus; all are welcome to challenge him, but they must make sure to bring their “A” game.

With an increased reliance on EA sports for connection to the athletic world and, in turn, a growing number of FIFA players, Daniels reports that “things are more competitive now.” Apparently, Keil Hall has been cultivating a sort of friendly competition, where they play each other and then rank themselves on a FIFA board hung up in the dorm. And occasionally, there is a floor vs floor FIFA game. These events create a routine that students in the dorm can talk about, including trash talk and “chirping,” and to which they look forward. Ultimately, though, and most important at that, they provide an opportunity for players to become closer as friends. To sum this up, Daniels states, in agreement with Malo, that the best sports games of the year are “FIFA [and 2K]. Done.”