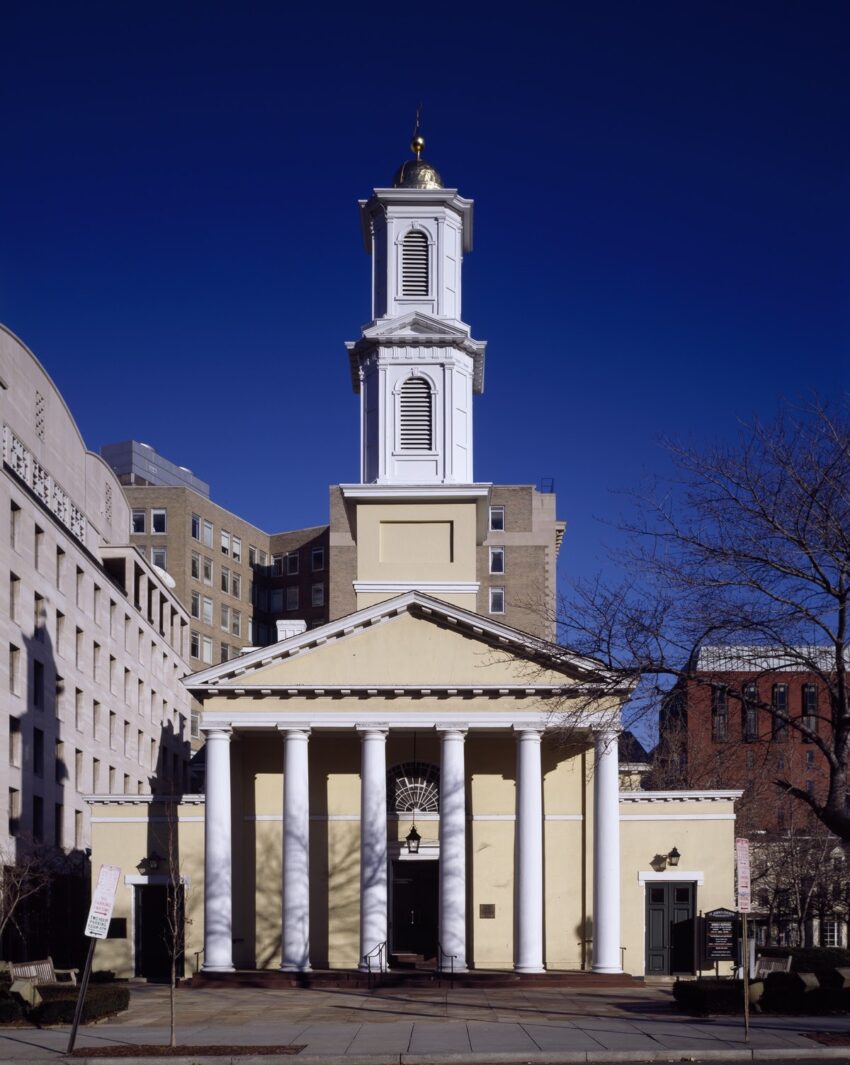 I was three weeks old when my mom took me into Washington for the first time. I would make the same trip on countless occasions in the coming years, but I like to imagine that first drive – dusk has just settled and snow is falling, gentle but steady. It’s Christmas Eve. I’m going to my first service at St. John’s Church, where I will later be baptized, the church where my parents were married and my brothers are buried.

Four months ago, it burned. Protesters and riot police clashed on the street I grew up walking. The next day, the church was surrounded by a chain-link fence topped with barbed wire. Every window was boarded up. Tendrils of smoke still escaped from the basement. A sea of black helmets and riot shields.

A week later, on June 4, DC braced for another night of abject violence brought on by unspeakable injustice. This time, though, artists took to the streets. Overnight, commissioned by DC Public Works, seven people painted the words “BLACK LIVES MATTER” down the length of 16th Street NW, in a mural so large it can only be photographed in its entirety from high above. The next day, Mayor Muriel Bowser officially renamed the plaza. A crowd gathered to see the sign unveiled from beneath a DC flag. They linked arms. They help up their fists. A city came together. It was Breonna Taylor’s birthday.

A month later, the fence was still up around St. John’s. Most of the windows along Black Lives Matter Plaza were still boarded up. The street, however, is alive. On September 5, the church collaborated with the P.A.I.N.T.S Institute of DC to decorate the plywood covering the stained glass windows. Street artists from all over the city flocked to St. John’s. The church’s doorstep, so long a battleground, became a canvas. In the words of Rev. Robert Fischer, the murals were intended to “shine God’s beauty outward and spread the message of God’s grace to our neighborhood.”

The Smithsonian has expressed interest in obtaining the boards once they’re taken down, citing their cultural relevance. The plywood covering the entrance to the parish, previously covered in graffiti, is painted with a mural of Desmond Tutu, the legendary South African cleric and anti-apartheid activist. Next to his portrait reads a biblical verse: “Let justice roll down as waters, and righteousness as a mighty stream” (Amos 5:24).

The murals touch on many aspects of today’s turbulent world: the pandemic, racial injustice, political strife, economic crisis. They hold in common, says Rev. Fischer, the concept of ubuntu, championed by Tutu. There is no direct equivalent in English. It most directly translates to “our lives are inextricably bound together.”

Displays of creativity and unity like this one are happening all over the world. In a war-torn province in Syria, George Floyd’s face is painted on a lone fragment of wall standing amongst a pile of rubble. On a rooftop in Naples, Italian artist Jorit Agoch painted a mural of George Floyd, Malcolm X, MLK, and Angela Davis above the words “Time to change the world.” Floyd and his final words are painted on the Berlin Wall.

These street artists wear masks. They distance from each other, yet they put up their fists. They are a product of the time they live in, and the time for which their work serves as a dark and piercing mirror. Throughout history, turbulence and change have walked hand in hand, and wherever there is either, there is art. It is present not merely as an afterthought, or a mode of expression, or a coping mechanism—it is present as a medium of change. Pamphlets in the American Revolution, AFRICOBA in the Civil Rights movement, Haring in the ’80s.

Here and now, more than ever, the cliche about art expressing what words cannot proves its relevance. It expresses the collective pain of 400 years of a people’s unspeakable oppression, as well as the restlessness of a world longing to escape the shackles of stagnation. The art of this moment in history will grow to define it. What it defines, however, lies in the fingers of the painter, the bristles of the brush, and the eye of the beholder. It lies in the hands of a generation. The choice is ours.