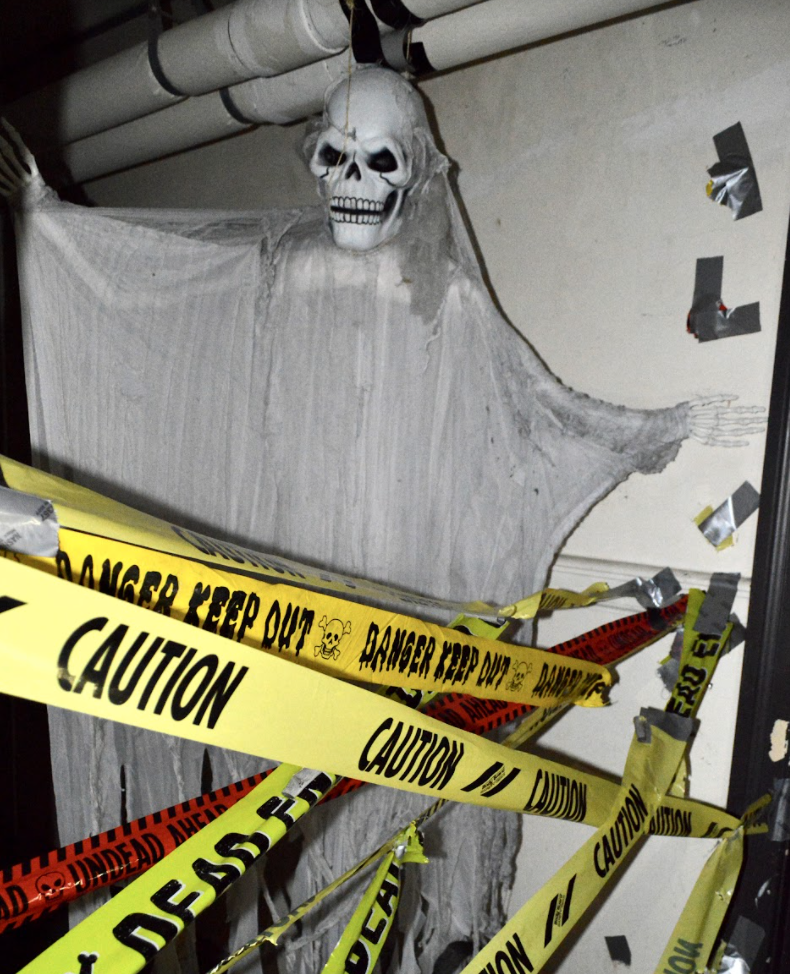 As Mercersburg Academy eases out of COVID-19 restrictions, out of lockdowns and virtual learning, there is still a feeling—a need—to build back one of the most valuable and essential aspects of the school: its community. The close environment at Mercersburg is often taken for granted, as there’s a lot of work and organizing behind the scenes required to plan events and encourage students to go outside of their dorms–no easy task. Despite the difficulties, this meticulous planning is managed by a single woman: Trini Hoffman, director of student activities.

As October 31 approaches every year, Hoffman works tirelessly and ceaselessly to put up events like the haunted house, Fowle Hall Fall Harvest Party and trick-or-treating. The first haunted house on campus dates back to 1994. With the help of her brothers, Hoffman staffed the spooky event. “At that time we had a whole bunch of people in the field running up and scaring people,” Hoffman says. However, renovations to the barn were inevitable, making it unsuitable for a Halloween event.

“I had to find another spot for the haunted house, but I lived in Main Hall as a dorm dean, and I knew what fifth floor was,” Hoffman says. “There was one year that I felt it was haunted. I had an experience. Every time I finished decorating a room, I would pull the blind down. In this one room, every single time I went up to go in this room, everyday the blind would be up about 4, 5 inches. It was almost like somebody was raising it up just enough to peek out. So in that room was a gargoyle and a skeleton, whose eyes lit up red. A security guard noticed one night the room was lit up red. He went up, turned them off. That door (up on fifth floor) is locked by a metal padlock, ya’know. Several days in a row, the room lit up and several days in a row, the blind was up. So then we removed decorations. It sort of spooked me a little bit. So I no longer decorate that room.”

As the saying goes, when one door closes another one opens. The barn may have been a closed door, but fifth floor Main shaped up to be a perfect location for the haunted house, which occurs every two years.

18 or so years later, Hoffman started the trick-or-treating tradition, which began in the dorms and has since expanded to include Burgin Center for the Arts, the Irvine Memorial Chapel, and the faculty houses–a majority of the campus, in essence. According to Hoffman, there were 365 trick-or-treaters this year. “These kinds of events especially connect students to the school in an important way,” she says.

“I can’t imagine Halloween here without trick-or-treating,” says Nicole Treml ’22. It’s an important tradition in Mercersburg, partly because it’s one of the biggest activities that isn’t required. She says, “My freshman year, I didn’t go to many events because I was a day student and I wasn’t on campus on the weekends.” Trick-or-treating served as the perfect remedy. “It was something to do with my friends, and I felt I was missing out before. I definitely think I got closer with my friends when I started coming to the events,” says Treml.

After trick-or-treating ended this year, acting head of school Quentin McDowell and his wife Lauren McDowell handed out hot chocolate and donuts to students in front of the Irvine Memorial Chapel. “We greatly enjoyed taking part in the Halloween festivities on campus. Given the circumstances so far this year, it has been harder to find opportunities to gather for casual moments of connection. Trick or Treat was a perfect excuse to bring many members of our community, including students, faculty, staff, and families, together for some wholesome fun,” McDowell says.

As if this weren’t enough, Hoffman worked with the prefects of Fowle Hall to organize the Fowle Hall Fall Harvest Party, which took place  Friday night before Halloween. They set up booths in the Simon Student Center featuring a variety of beverages and snacks, including hot chocolate, apple cider, donuts, flavored popcorn, cotton candy, and caramel apples. There was a pumpkin carving station. At the beginning of the event, students competed in a costume contest.

Having fun has always been Hoffman’s trademark, well before she began working for Mercersburg 30 years ago. “I was the type of kid that could have fun anywhere,” Hoffman says. “Right down on the other side of Seminary street… we didn’t need places to have fun; we made our own fun. We played kick-can derby, we played flashlight tag on our bicycles. We had a rolling skating rink 30 minutes away in Waynesboro, and I lived right next to the movie theater. We made our own fun.”

Hoffman infuses every activity she organizes with the sentiment that she hopes to pass on: you can create fun. When it comes to organizing events, budget doesn’t matter. Whether it’s the Goodwill Fashion Show or the Paint Dance, Hoffman strives to create interactive and enjoyable experiences that will permit students to forget that they are “stuck” on campus.

A million praises wouldn’t be enough compensation for Hoffman’s fervent devotion to the Mercersburg community. After all, it’s easy to overlook that there have been 47 SAC events this year and that all of them have been organized by one person. Quentin McDowell says, “I have known Trini for nearly fifteen years and the only thing that may be more impressive than her work ethic is her ceaseless devotion to serving the students in our community through thoughtfully planned activities and experiences. It is safe to say that we owe Trini a lot of credit for helping to build and sustain the spirit at Mercersburg. We are all lucky to have her.”