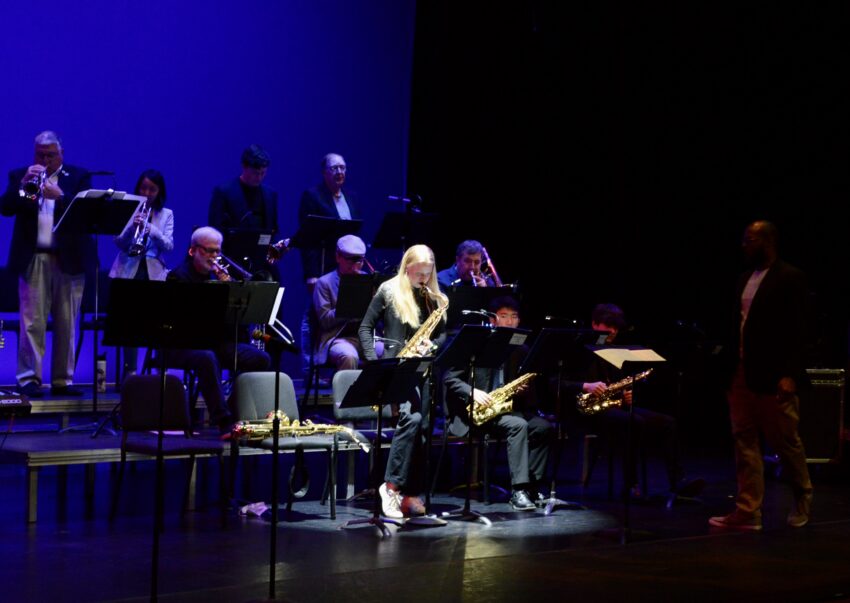 On April 8, the musicians of the Jazz Band, Magalia and Octet took the stage to perform in the 2022 Pops Concert at the Burgin Center for the Arts. The annual event provided an opportunity for the student body and faculty members to celebrate the musical achievements of the community. As it always does, the Pops Concert carried a positive message that was meant to inspire.

Led by music director Bryan Morgan ‘07, the Jazz Band performed a total of five pieces: “Megalovania” by Toby Fox, “Caravan” by Duke Ellington, “Stairway to Heaven” by Jimmy Page and Robert Plant, “Falling Water” by Ryan Fraley and “Misty” by Erroll Garner. The group started working on these music pieces during the winter term, rehearsing twice a week in preparation for the Pops Concert.

The Jazz Band brought excitement, effort, and intensity to their performance. Saxaphone player Alex Van Ess ‘24 noted, “The purpose of the concert was for the students and directors to display their hard work. Hopefully, the audience experienced how much work the members put in and the talents of the music department, as well as enjoyed a variety of different music.”

Morgan elaborated on the diversity of the music. “For Jazz Band, every time we perform, I try to have a solid variety of music. I try to include some jazz standards that the musicians should know. I also like to give seniors a chance to perform a solo feature piece of their choice,” he said.

The approach added to the excitement of Jazz Band members. Ethan Stiffler ‘25 said, “We had chosen about half of the pieces we played, so there was a sense of pride in performing them. At a certain point, Aiden [Kirkman ‘22] had called and directed his own rehearsal, which in my eyes showed how unique the jazz band really is. The message behind the songs, to me, are that of growth and leadership.”

The Octet and Magalia, Mercersburg’s a cappella groups led by music director Jim Brinson, continued to demonstrate the power of music through their passion. Mercersburg’s coed ensemble, the Magtet, a combination of Magalia and Octet, also performed, adding their unique sound and harmony to the Pops Concert.

The a cappella groups started working on their music during the winter term and rehearsed four nights each week. Like the Jazz Band, the members of the Octet and Magalia emphasized diversity with their pieces.

Magalia sang “Ex’s and Oh’s” by Elle King, “Wannabe” by Spice Girls and “Somebody I Used to Know” by Gotye. The Octet performed “You Were On My Mind” by Sylvia Fricker, “Can’t Feel My Face” by Tesfaye, Martin, Kotecha, Payami, and Svensson, and  “Billionaire” by Lawrence, Hernandez, Levine and McCoy.

As a group, the Magtet performed “Lovely” by Billie Eilish and “Goodnight Sweetheart” by James Hudson and Calvin Carter.

Before the concert, Morgan proclaimed, “We want the audience to enjoy themselves and want to come back for another performance!” Truly, the Pops Concert demonstrated the Blue Storm spirit and the diversity of the Mercersburg community.