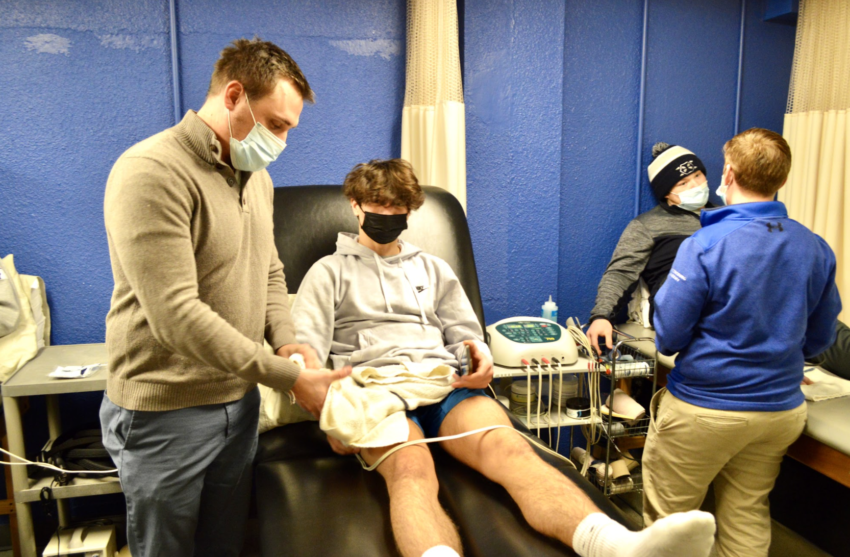 For anyone who has participated in an athletics-based PGA during their time at Mercersburg, there’s a high chance that the athletic trainers figured prominently in their everyday lives.

The work schedule and routine for the athletic trainers varies daily. Andrew Myers, associate director of athletics and one of Mercersburg’s two trainers, said, “One of the great things about the job of athletic trainer is that there is not really ever an average day! Each day is usually a bit different, especially at Mercersburg. Some days require staff meetings and school meetings while others provide fewer meetings, but more athlete treatments, evaluations, game coverages, etc.”

Leah Daniels, the other trainer who works alongside Myers, explained in detail the typical duties for which they are responsible. They include, just to name a few, evaluating athletes’ readiness to play, caring for athletic injuries, and assessing and reporting the progress of recovering athletes to coaches.

Though they may make it look easy, there are many challenges that the athletic trainers have to face. “They deal with a lot of negativity because the athletes don’t want to be hurt, the coaches don’t want their team to be hurt and everyone thinks they are better before they are, so the ATC’s are often ignored,” said Paul Sipes, director of athletics for operations and outreach, as well as head girls’ basketball coach. Daniels added to this point, saying that one of the hardest parts of the job is “telling someone they have a serious injury that is going to sideline them for a few months or even a year.” Myers said that the difficulty lies in “trying to fulfill the needs of many athletes in the same, short amount of time,” as well as, “not having enough time to get everything done with athletes that you would like to. Sometimes it makes it hard to accomplish as much as you can with athletes.”

Maddy Stang ‘22, student assistant to the athletic trainers, pointed out the qualities that athletic trainers need to have in order to deal with said challenges, such as being proactive as the room gets very busy before practice or matches. Therefore, preparing the room and themselves before the rush hour is crucial for the efficiency of dealing with athletes. Sipes also remarked on the traits that efficient athletic trainers possess, saying, “The good ones (like ours) care about the athlete’s health first and foremost, while making real-time evaluations to get the athletes back in service as fast and as safely as possible.”

Myers described other abilities that enable athletic trainers to do their jobs in the most effective way possible. According to him, these traits “include good communication (with athletes, parents, coaches, health center), adaptability (as anything can happen at any time), attention to detail and preparedness, and the ability to multitask. As most athletes know, sarcasm and humor go a long way too!”

Mercersburg’s athletic trainers have always served the school professionally and in a manner that is most comfortable to the athletes. Currently, Daniels and Myers look after Mercersburg athletes six days a week and teams will forever depend on their services.