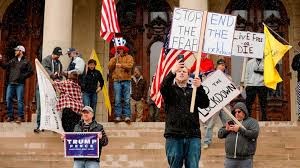 Despite the haunting one million confirmed cases of COVID-19 in the United States, demonstrators across the nation, defying stay-at-home orders, have gathered in public rallies to demand the reopening of states and the economy. The protests were in large part spurred on by President Trump, who openly supported right-wing protests of social distancing guidelines. His encouragement of these rallies conflicts with earlier announcements in which he declared that he was passing the responsibility for determining the reopening of states to state governors. President Trump issued tweets such as “LIBERATE MINNESOTA” and “LIBERATE MICHIGAN,” battleground states that have established stringent social distancing restrictions. In response to the state of Virginia’s push for stricter gun control measures, the President sent out a message to “LIBERATE VIRGINIA, and save your great 2nd Amendment. It is under siege!”

Such tweets egging on demonstrators are only fueling fear and frustration among millions of Americans. In addition to highlighting the economic concerns of American citizens, the rallies have also aided in sharpening an already polarized political divide. At demonstrations in Michigan, New York, and Ohio, protestors, some of whom were armed, gathered together with anti-government activists and demonstrators affiliated with the Tea Party. In Austin, Texas, protestor Owen Shroyer stated that he was not concerned about being arrested or acquiring the coronavirus, claiming that the spread was a scheme by the Chinese Communist Party. Shroyer is the host of the show “Infowars,” a far-right website established by conspiracy theorist Alex Jones that labeled the Sandy Hook school shooting as a hoax. Shroyer remarked that they want to “put out fake propaganda on Twitter, pretending like everyone’s dying,” and that “it’s all Chinese Communist propaganda.”​ ​In Michigan, one protestor brandished a Confederate flag, and others carried an array of political paraphernalia praising the president and targeting Governor Gretchen Whitmer, featuring the phrase “Lock her up.” While Governor Whitmer commented on MSNBC that it was a “political rally that is going to endanger people’s lives because this is precisely how COVID-19 spreads,” the President expressed his sympathy for demonstrators’ having to suffer through such difficult social distancing measures, remarking that the protestors “seem to be very responsible people to me.”

It is understandable why so many Americans are worried about the stability of the economy due to the coronavirus. In the last several weeks, more than 30 million Americans have filed for unemployment benefits. The unemployment rate is approaching 17 percent, surpassing all marks aside from those set in the Great Depression. Despite financial fears, recent polls reveal that most Americans support restrictions designed to prevent the spread of the virus. In a Pew Research survey, 66 percent of those who responded replied that they were concerned that state governments would lift restrictions too swiftly. Support among the majority of Americans for continued social distancing restrictions is in line with announcements from public health officials who are warning about the removal of restrictions too soon, especially with testing shortages, which could severely intensify the spread of coronavirus and potentially bring about a second wave of infections.