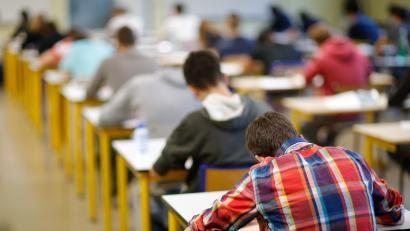 Without a doubt, the COVID-19 pandemic has mutated practically every aspect of life, from politics to internet culture. While both of these things are important to Mercersburg students, another aspect of life that’s been changed is standardized testing––more specifically, the Standardized Aptitude Test and American College Test. With limited testing locations, fewer testing dates, and the possibility of colleges remaining virtual, much of the application experience has been turned on its head. According to Mike Conklin, the Director of College Counseling, “Each year we collaborate with our students to assess the likelihood of their admission to the colleges on their list, and test scores have been an important metric in that assessment; without test scores, we’ve had to calibrate the college list for balance a bit more carefully.”

Thankfully, there’s still an element of familiarity for some students. Jordyn Beard ‘21 took the SAT in September, and she thought it was really similar to her experience of taking the PSAT last year. “Besides the masks,” she said, “I don’t think there were any differences.” On the other hand, Upper-middlers who are just starting out their college search process are grappling with the fact that the schools they want to apply to might not be test-optional next year. Isonah Dlodlo ‘22 plans to take both the SAT and the ACT, but it’s difficult to tell whether or not she’ll need them when applying to college. Staying test optional, to her, “is pretty reassuring, like a backup plan.”

If a student’s test scores aren’t stellar, remaining test-optional allows them to put greater focus on other parts of the application, such as grades and who they are as a person. Katie Dawson ‘21, who has taken the ACT but plans to take it again, agrees. The only major difference she predicts, “It might be easier, if only for the fact that I feel more comfortable in the situation.” Very similarly, Meagan Owens ‘22, who just started her college search, can’t foresee any major differences between a normal ACT and one in our current environment. An emphatic “no” was her only answer when asked if she was anticipating any differences whatsoever.

For many, there’s hope that the lessons learned during this pandemic will carry over into the future. One such lesson: standardized tests might not be the lauded indicator of college-readiness that many assume them to be. Conklin explains, “Because I am very skeptical about the value of standardized testing as a measurement of academic ability or potential, my hope is that test-optional and even test-blind policies will continue to expand.”