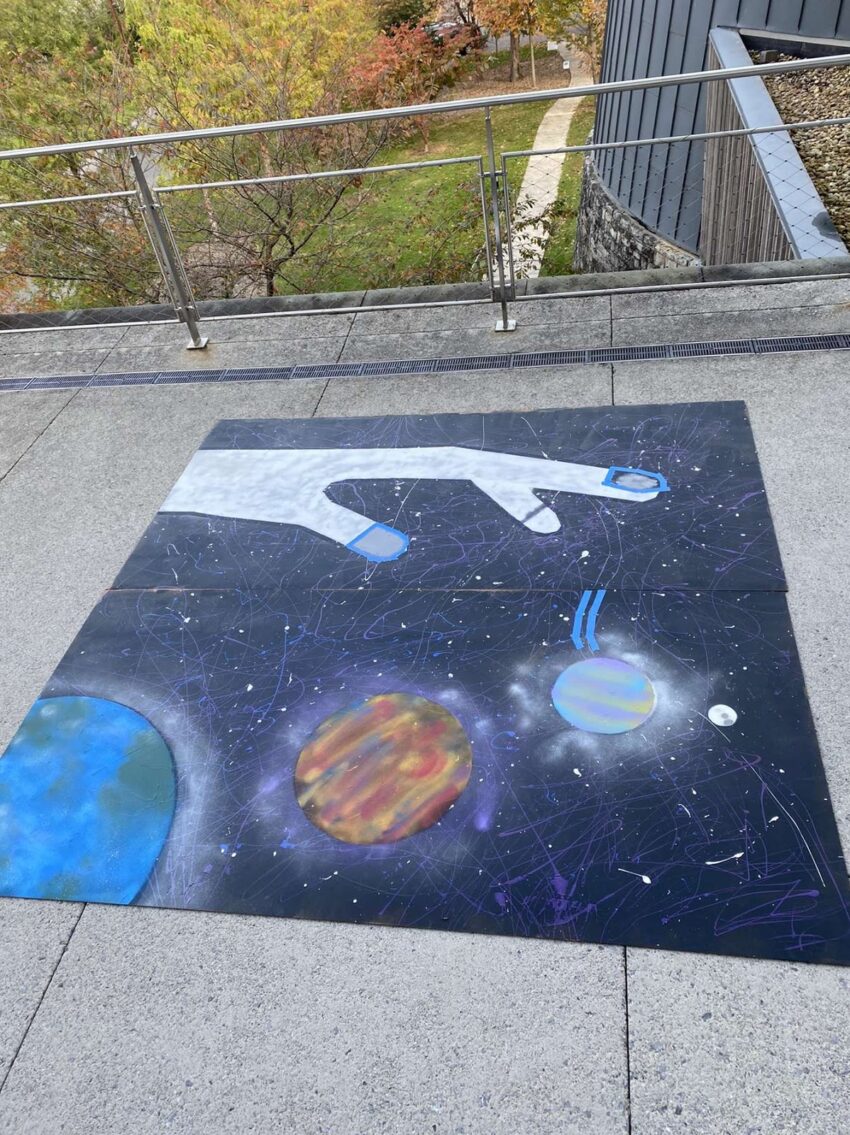 Returning students know that every year the CommArts Springboard creates large murals in the middle of the quad as part of the collaborative Mural Battles project. While this year has brought numerous changes to the way Mercersburg Academy functions, this project is one that can remain relatively the same as compared to previous years given its history as an outdoor project. Of course, factors such as time and weather pose potential problems for the project this year, given the fall timing. “We had a 9-hour block to work on the project. The day was relaxed, fun, and memorable,” says Kristen Pixler, the Comm Arts instructor.  “This year the students are moving the panels and working on them in our regular class time. It has been difficult to find days that have an appropriate amount of time with weather that will accommodate the medium of spray paint.”

Like every class this year, limited time and space have been ongoing issues, but this CommArts class continues to successfully execute their panels. “The students broke up into groups of 4-5 and were given a series of words to respond to visually in their murals,” says Pixler. The group members needed to prepare in order to make one cohesive piece that they could all agree on. “We learned how to collaborate and make everyone’s artistic ideas heard,” says Sam Nobile ‘21. Aiden Kane ‘21 says, “I got to learn about my peers’ creative perspectives.”

Members of the class hold differing opinions about how the Mural Battles project operates this fall. Pixler says, “Unfortunately at this stage it feels more like work than last year’s.  The groups are working well and are in good spirits.” Nobile says, “My group wanted to have fun and try new things. We wanted it to be less of an assignment and more of a fun experiment.” Kane  agreed. However, Caroline Dillard ‘21 says, “It wasn’t really my top priority because of the limited time we have to complete our personal projects, which seem a bit more important to me. It was more of a task to get done than a fun experience.”

Everything looks different in this moment in history, even projects that were designed to take place in wide open spaces. However, the lessons remain the same, especially for the Mural Battles. “It forced us to ask more questions with each other and be more clear. We all had similar ideas but didn’t know how to execute it; we had to be more vocal.” says Nobile. Pixler says, “They learn to deal with large scale work which is new to many of the students. They learn to conceptualize and problem solve as a group. They must learn the strengths and challenges of their team members and utilize the skills and talents of each member.”