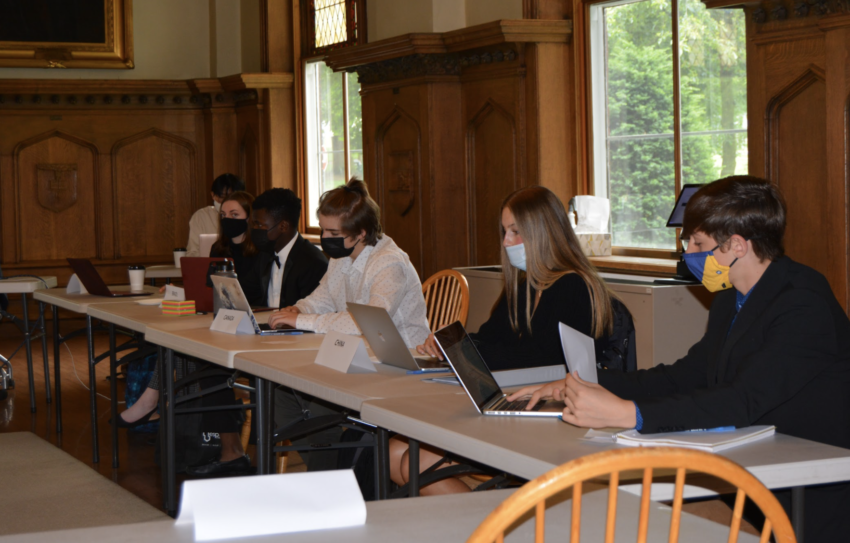 CMUNCE is an annual three-day international affairs conference for high school students, hosted by Columbia University. In light of the pandemic, this year’s CMUNCE conference was held virtually from January 14 to 16. Nevertheless, Mercersburg students had the opportunity to spend the weekend debating, negotiating, and speaking with students from all over the world without leaving campus.

CMUNCE features two types of committees: General Assembly and Crisis. The General Assembly committee is the classic form of Model UN, which mimics the official deliberations of the United Nations. Topics in the General Assembly committees typically reflect historical or present-day issues. Crisis committees revolve around a central situation, the “crisis,” which delegates work to solve throughout the committee. The “crisis” comes into play when the leaders introduce unfolding events to which delegates must respond. Delegates typically represent people, characters, or positions rather than a country representative.

This year’s committees include the Spanish Civil War; SOCHUM (Social, Humanitarian and Cultural Issues); and Wolves, Goats, and Cabbages (Europe, Germany, and Russia at the turn of the century); as well as more lighthearted ones such as the Krisis of the Kardashians and the NASA Board of Directors.

Zain Qureshi ‘22 participated in CMUNCE in person in January 2020. He said, “CMUNCE in NYC was very fun as we were able to explore the city and experience the diplomacy aspect of Model UN, which is difficult to replicate virtually.” Zain participated in CMUNCE online last year, and he said, “While it was harder to communicate online during crisis committees, I hope that this year’s conference was more coherent and organized for the delegates.”

Some Model UN PGA members are participating in CMUNCE for the first time this year. Kevin Hang ‘24 said that CMUNCE would be his first time in a crisis committee. “I’m excited to be part of a crisis and I hope to write the winning position paper in my group. One of my major roadblocks last year was gaining the confidence to speak in front of others. However, realizing that everyone is in the same boat makes it much easier to speak,” he said.

Justine O’Connell, director of Model UN and Global Programs at Mercersburg, said, “Mercersburg participates in Model UN because it gives kids the chance to practice simulation of Model UN committees, practice healthy debate, and work together with people from opposing viewpoints to put forward a resolution…It’s a great opportunity to debate kids from other schools, cities, and even countries!”

In February, the Mercersburg MUN team will attend an in-person conference hosted by Georgetown University in Washington DC. And, in the spring, students in the PGA will host and prepare an on-campus conference open to all Mercersburg students.

“I hope to see more students get involved, whether through PGA or participating in a conference–Model UN truly builds public speaking, research, and problem-solving skills,” said O’Connell. “Our springtime conference is something we could turn into a larger event where we could invite students from the local high school or the greater DC area.”