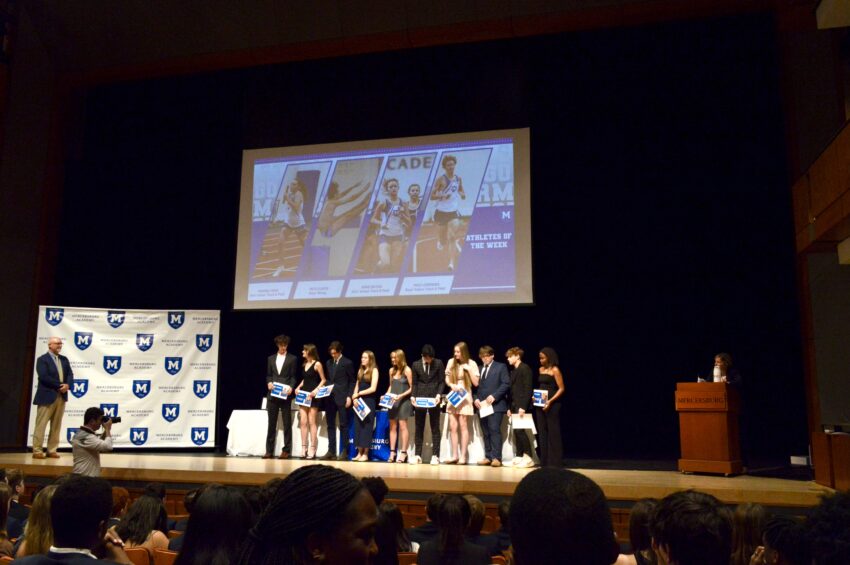 Last Monday, the Mercersburg Academy athletic department held the tri-annual MESPY awards. To many athletes, the MESPY ceremony is an honor, a time for recognition.

The origin of MESPYs dates back to when Dean of Experiential Programs Rick Hendrickson was the Director of Athletics. To honor athletes who have performed outstandingly throughout the season and to express gratitude to the others who had a great impact on their respective, the MESPYs were created.

The athletic directors and staff devote considerable effort towards the preparation for the award ceremony. Paul Sipes, Athletic Director for Operations and Outreach, said that the department sends polls to coaches before the MESPYs to inquire about key players and the teams’ successes. The department then creates slideshows and video clips while preparing the scripts for each award.

The coaches are also involved in the process of nomination for department-wide awards. All head coaches receive a form from the athletic directors asking for nominations from their own team and others. This allows a diverse set of candidates for the MESPY awards.

The nomination process gets difficult, as every team has uniquely qualified athletes. “Even on a team as small as a squash team of ten, it’s really hard that there are only a few awards, but we keep very thorough stats throughout the season, which can make the nominating process more efficient and fair-minded,” said head squash coach Ryan Tyree.

Similarly, head swimming coach Glenn Neufeld said, “The nomination process really depends on the award. For instance, for the ‘breakthrough performer,’ I would look for someone who is a relatively new student, who just came in and performed fabulously. It’s not only about the games and meets, even in practices too, how much of an impact they make to the team.”

A lot of athletes and coaches seem to enjoy the ceremony.

“The MESPYs are always fun. It’s a great way to wrap up the season. The bonds that form in each team are tight and it shows in the MESPYs. When a teammate gets an award, their team cheers the loudest. It’s the competitiveness between teams that makes it exciting. I wouldn’t change a thing about it,” said squash player Daniel Zhong ’23.

Swimmer Mason Green ’23 agrees, saying, “I thought it was pretty fun to see some of my peers get nominated to possibly win, especially on the swim team.”

Neufeld added, “This is a much better format than other ceremonies I have done before, like a three-hour banquet. From my perspective, I think it worked well,” he agreed.

Of course, there is always room for improvement. Tyree said, “It’s more trouble for the dining hall staff. Catering out on the patio of the Burgin Center could be a nice way to fancy it up some, more like prom, like having tables with signs for each team. I have been to these events before when the coaches go too long and talk too much, but on the other hand, I wish there were a way to publicly recognize some other amazing kids on our teams!”