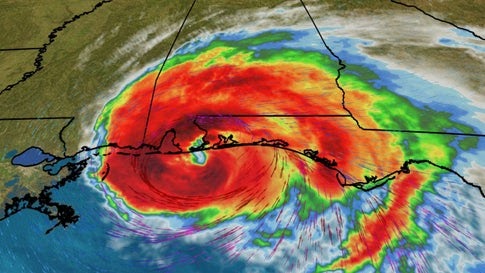 Pandemic. Social unrest.  Political crisis. What next? No matter where you spent the summer nor what news occupied your inbox, you also certainly heard about the numerous natural disasters that plagued the United States this past summer. While most of us only witnessed the devastation on screens, some members of the Mercersburg family experienced these events in their own backyards.

The Mercersburg community has roots all over the country and the world. Due to our geographical reach, whenever there is an event that reaches the headlines, it is likely that someone in our student body was directly impacted, whether it’s fires in the West or hurricanes along the Gulf Coast.

The fires that started in El Dorado, California at a “gender reveal party” have burned thousands of acres in California and the surrounding states. The fires’ effects have had a much wider range than the fires themselves; the smoke from California traveled via the Gulfstream to produce unusually cold weather on the East Coast.

The fires and the smoke they caused made the air unsafe to breathe and forced people to shelter in their homes. As Zane Arky ’23, who lives in Los Angeles, said, “There was a cloud of smoke that covered the sky for a couple of weeks. And Los Angeles is relatively far from the fires. Those closer to Northern California faced seriously harmful air quality. The smoke in the air also produced the visual of a strikingly orange sky that many shared in videos online.” Katrina Lovegren ’21, a Northern California resident added, “My area was the most affected by the fires. Some of my friends lost their homes, my family members were evacuated, and the summer camp I attended since I was 11 was completely destroyed.”

In contrast to the heat and flames in the West, the South received a very different blow from nature’s toolbox. Hurricane Sally was the latest destructive storm in a truly record-breaking hurricane season. The season has been so active that the list of hurricane names is already exhausted and Greek letters are being used to name new hurricanes. This has only happened once before in history.

Hurricane Sally made landfall in Gulf Shores, Alabama near the Florida-Alabama border as a Category 2 storm with wind speeds of about 105 mph (165km/h). The storm was devastating because of its slow movement, causing it to hover over the area for hours, dumping many inches of water onto already saturated ground. In this case, it was the buildup of water rather than the wind that made this hurricane deadly.

Sally prompted a flurry of activity in Southern states as people prepared for the storm, boarding up windows and filling up sandbags in an attempt to battle the wind and rain. Rebounding from a hurricane can take months, even if the actual storm only lasts a few days. Extensive property damage can make whole neighborhoods unlivable and send people fleeing to other parts of the country. Eva Speck-Ewer ’24 from Brandenton, Florida said, “It can sometimes take up to a few months to clean up the mess around a large city. Yet even after a few months, after everything is picked up and returned to new, the long-term effects of a powerful storm like this can be felt years down the road.” The areas damaged by Sally and the other storms this year are beginning to rebuild but the scars of these storms will be felt years after.

The silver lining of natural disasters is the good they bring out in all of us. People in California drove into dangerous areas to help loved ones evacuate, and first responders risked their lives fighting the fires and helping trapped people. In the South, people drove into hurricane-affected areas to pull people out of the floodwaters. Neighbors lend chainsaws around to help chop up trees that fall into roads. Help arrives from other states and even other countries.  In times of disaster human beings can always count on neighbors and friends to lend a hand.