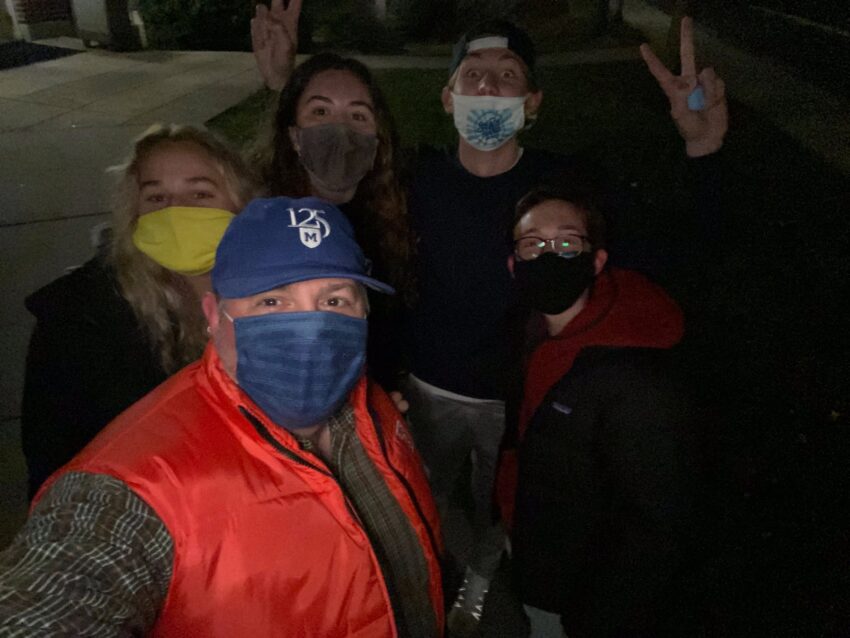 On October 16, during the annual Capture the Faculty game, the notorious and never apprehended English teacher Matt Maurer was finally caught. Maurer has played the game for 17 years each time eluding capture.

This year, on a whim, Maurer decided to disguise himself and hide in plain sight. His COVID mask gave him the incentive to try out this “hiding spot” because he was able to cover his face without causing any suspicion. He knew of teachers who had done it in the past, some finding success and others not. This decision would ultimately cost him his streak and status as legend.

Isabel Lewis ‘21 and friends were playing Capture the Faculty, as they had for the past three years. The team was walking between Tippetts and Fowle, searching for hidden faculty members, when they came across Maddie Dawson ‘21, Lois Hargrove ‘21, and Mia Ingram ‘21. The second team motioned Lewis´s to them and told them that they had just seen a man in a bright, orange jacket walking around different buildings on campus trying to open their doors. They said that they thought it could have been Maurer, but they approached him and he said that he was someone else. Dawson reported, “I was genuinely scared.”

Both teams panicked a bit at the thought of a random man trying to enter buildings on campus, so they decided to inform Trini Hoffman, the organizer and faculty member running the game. While explaining the situation, Dawson’s team mentioned that they had thought it could have been Maurer. Hoffman was far less suspicious of the situation and went to investigate.

Both teams trotted out to locate the man. While Dawson’s team set off in another direction. As Lewis’s team went after a man in a bright orange jacket with a familiar walk headed to the west facing doors of Irvine. They knew it was Maurer. The team ran up to him saying, “Mr. Maurer, we caught you!” After some persistence on the team’s part, Maurer finally gave up his façade and faced his first ever walk-of-shame back to the student center patio. Maurer was sad to relinquish his record but said, “I’m glad it was my students who found me!”

Throughout the night, several other teams approached Maurer, but he pushed them off saying that he was someone else or that he was not playing the game. Dawson said, “We were cheated.”

In the end, Dawson explained what happened to Hoffman and split the 500 points that were with Lewis’s team. Team Dawson, because of points they secured by finding Jay Bozzi, ended up tying for first place. Dawson thinks they should have won but is happy to have the sweatshirt.

Despite his defeat this year, Maurer looks forward to playing again. “I have a new streak to start!” he said.