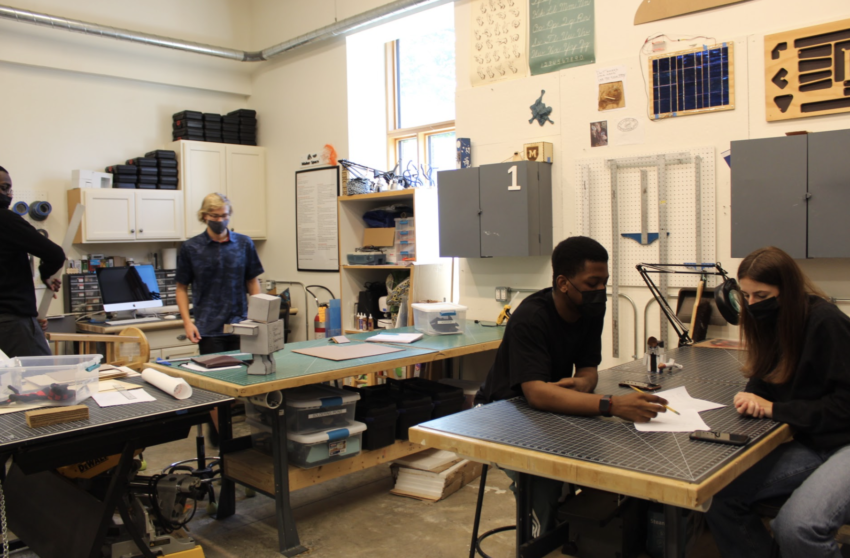 With the school year officially underway, all students are settling into the routines of their classes. Seniors and postgraduate students are tackling a non-core, interdisciplinary, project-based capstone course: Springboard.

One of these capstone classes is Maker’s Lab, in which students are continually tasked with hands-on projects that aim to build or create. While the class serves as a way to cap senior year, some students also use this opportunity to expand or explore their interests.

The first task Maker’s Lab students were faced with was to construct a sensory cardboard object with only hot glue. Alice Hwang ’22 built a miniature forest in order to express her appreciation and gratitude for nature. Hwang said, “It was challenging, but a lot of fun!”

Pete Curtis ’22 said, “I chose Maker’s Lab because I have been interested in engineering and design for a while and wanted to take a class where I could explore those fields.”

Curtis ‘22 elaborated, saying, “Our first project, although crude, was used to show us the design process and how to create something that needs to fill a need. I found it interesting and challenging.”

The next assignment in the class will be to build a piece of furniture out of cardboard, with one stipulation—it must be completely functional. Additionally, it must work along the Fibonacci Sequence, a continuous set of numbers in which each number is the sum of the two numbers before it. With the added challenges of both the cardboard and the specific number sequence, the next project will undoubtedly be challenging. Kenneth Yonke ’22 said, “We are introducing a lot of new ideas and concepts, and since it’s on a greater scale, it will be harder to design it.”

While there are smaller projects along the way, the course will end, of course, with a culminating capstone project, which will give students more flexibility with what they choose to design and create. The capstones will be presented to an audience at the conclusion of the school year, but students will begin work during the winter term. Many students in the class have already considered ideas they wish to pursue.

Hwang ‘22 declared, “I want to make a bigger version of the forest I already made.”

Curtis ‘22 said, “My original idea was to convert a motorcycle into an electric motorcycle. But after talking with another student who wants to do something similar, we may shift to a larger scale and construct an actual electric car, on a budget of course.”

Their Springboard presentations in the spring will unequivocally be a hit.

Franklin Bell, head of Maker’s Lab, adds, “The Maker’s Lab space is open not only for the seniors in the Springboard class, but any upperclassman who wishes to utilize the numerous resources available.” Bell invites students to “come in and make stuff on Tuesday and Thursday nights and some weekend nights.”

All in all, Maker’s Lab is an excellent way for seniors to use their passion and creativity to manufacture something unique to them. While this is just a one-year class, the seniors ideally will apply their newfound skills and knowledge to their college careers and beyond.