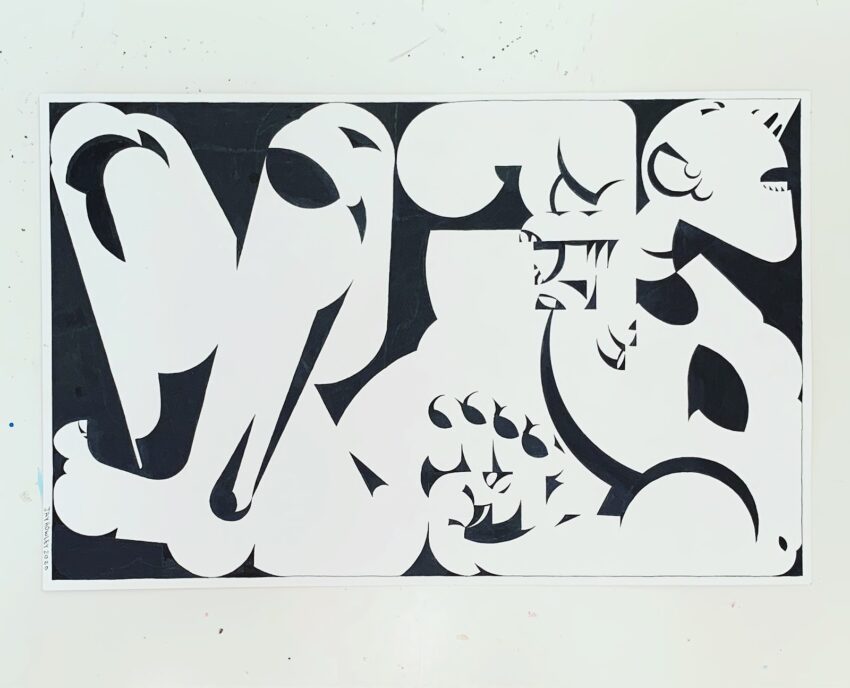 Jay Howley ’21 has been developing his aesthetic since he was in elementary school. An advocate for his own artistic expression at Mercersburg Academy as part of last year’s Advanced Studio Art course and through his independent study this past fall, Howley also promotes the work of others in his role as art editor of the Blue Review literary and art magazine.

In a typical year, one would likely find Howley in the upper level of the Burgin Center for the Arts creating his own work or asking others about their processes and offering gentle, helpful critique. This year, however, he has had to work with limited Burgin Center access, which, as any Mercersburg artist knows, is a difficult obstacle to overcome. Howely says, “I think if you have something to say with your work, and you’re passionate about it, you’ll find a way to get it out into the world no matter the circumstances.”

Howley has motivated himself with college portfolio deadlines and the message he needed to convey within his portfolio itself. “A bulk of my portfolio was done with just copier paper and micron pens, but I think I had a good enough message that it was able to stand out despite my lack of resources this past year,” says Howley.

Some of Howley’s current work includes creating a comic book he has been “brewing” since his Lower Middler year. He says the book is heavily influenced by his favorite comic artists Moebius and Tradd Moore.

Howely is also working on an acrylic painting as a part of his Cramped Man series. He says he looked to Henrik Delehag, Taylor Anton-White, and Eser Gündüz for inspiration in this work but is drifting away from them in his development as an artist.

Some of Howley’s favorite pieces include those of his Cramped Man series. His personal favorites are Cramped Man 2 and Cramped Man 5. He says, “When I made the second one, I felt like I was really separating myself from what was familiar and safe at the time.”

While Howley’s work is undeniably incredible, it is not made without struggle and “blood, sweat, and tears.” Speaking of Pink Man, created this past August, Howley says, “I hated every second of it, and wanted to quit whenever I looked at it. I’m still not a huge fan, but the portfolio reviewers I talked to thought it was the best thing in my portfolio.” He continues, “I do think there’s something to be said for testing yourself and pushing beyond what you think you would enjoy.”

Howley finds that for him artist’s block is not as much a problem as burnout. He says, “If I’m not pushed towards something by myself or an external force, it just will not get done.” When he does experience artist’s block, he says he likes to “shake things up.” He says, “Go somewhere, listen to something new.” He recommends Björk and JPEGMAFIA for “shaking it up.”

Music is very important to Howley in his creative process and he draws a lot of his inspiration from his media intake. “At any given moment, I’ll be reading two to three books, watching things, collecting interesting pictures on instagram, and I’m always listening to music.” He believes having a large database of influence is crucial for “well-informed and deliberate” work.

Howley would like to pursue a professional future in the arts, but he is also passionate about learning and mastering graphic design as an alternative option.

2 thoughts on “Jay Howley in the spotlight”