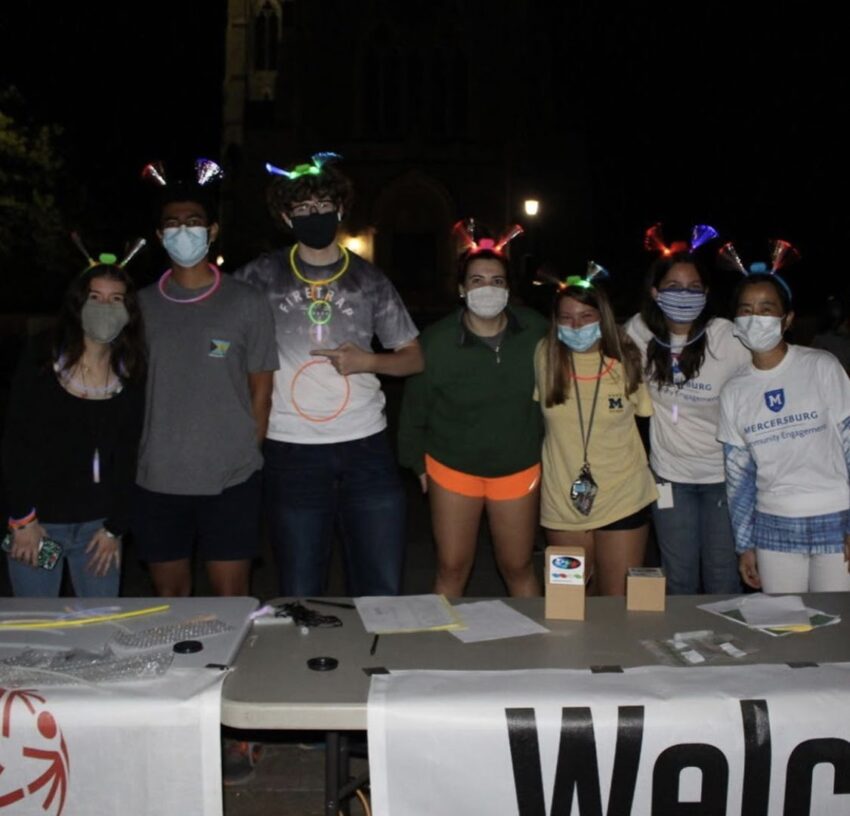 On the night of October 23, streaks of neon lights flashed across the dark horizon, illuminating the Mercersburg Academy campus. That night, the school’s Community Engagement program teamed up with Special Olympics Maryland to hold a fundraiser for Special Olympics athletes. Students decorated their outfits with fluorescent lights, wearing glow sticks around their necks and wrists, as they ran two miles around campus.

They started their run in front of the Irvine Memorial Chapel, ran down Sycamore Lane, to the Goldthorpe Athletic Conference, and back up to the Chapel. The spectacle was billed as the SO GLO Fun Run, and the Blue Storm soccer teams, swim team, girls cross country team, and football team, as well as other groups took part in the activity.  While some teams treated this event as a workout, others chose to walk the two miles.

Before the event started, teams congregated at the Chapel. Spirits were high and enthusiasm reverberated around the quad; teams chanted and sang together at the starting line. After repeating the motto of the Special Olympics, the race officially began.

Eric Yoo ’24, a member of the swim team, especially enjoyed the run, saying “It was a great bonding experience for the team as we were able to interact with each other during the run.” Participants shared this common sentiment as they laughed and chattered while they ran around campus.

Tricia Crocker, the faculty member who spearheads the Community Engagement team, was extremely impressed with the outcome of the GLO Run. “I cannot say this with absolute certainty, but it may be one of the most successful fundraising events we have had on campus.”

One of the best takeaways was the energy brought by the school community—from the starting line to the finish line, everyone put up a passionate performance. Some teams thought outside the box and brought a sense of creativity to the event. “Football helmets, swimsuits, and camping packs were worn,” Crocker noted.

During the pandemic, finding an activity that includes the entire student body is difficult. However, SO GLO allowed students to have fun and bond while raising money for a good cause.

Blue Storm teams competed, but this time they competed in a different way—a donation challenge. The end goal: to raise the most money possible. $9,100 was raised in total: the dance team placed first with an impressive $2,000 in donations. Football followed close behind with $1,900. The money raised will support the ​8,716 athletes of the Special Olympics Maryland. The ​So Glow Fun Run/Walk supports the Special Olympics mission by providing funds for athletes to develop physical fitness, demonstrate courage, and participate in a sharing of joy and friendships with their families and other athletes.

Hopes for more fundraisers with Special Olympics Maryland are high. “I would love to see our community host an annual event,” says Crocker. With a community excited to pitch in and give their all both in spirit and in donation, there is no telling how far the fundraiser will go.