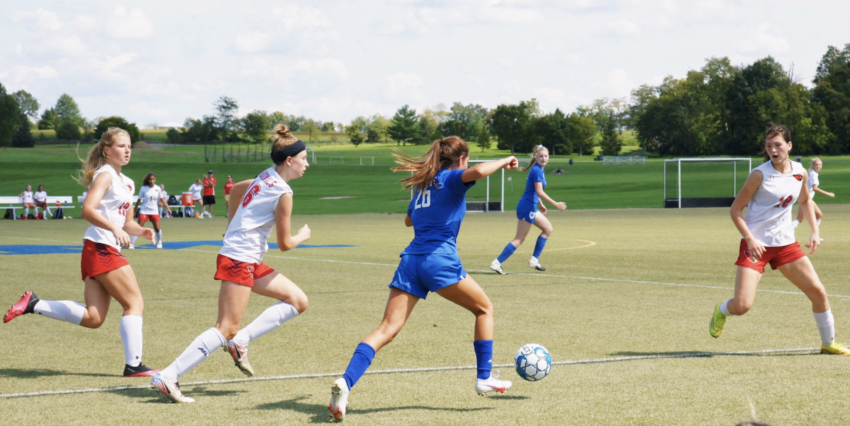 No matter how much someone may love a sport, it will not matter if the team’s dynamic is not top-notch. The girls soccer teams are playing well this season. The teams have been largely successful, and the community and atmosphere of the program has shone.

The energy is electric within both the varsity and junior varsity teams. Whether in practice or a game, the team seems to balance making jokes with serious hard work.

Sam Titus ’23 says, “There are definitely many laughs at practice and even during games. Out of all the teams I have played on, no matter the sport, this is the closest and friendliest team that I have been lucky enough to be a part of.”

Everyone on the team makes a significant contribution to the team’s energy. Titus went on to talk about members of the team that lead to the sense of community that exists: “We have a lot of strong characters on the team, whether it’s Susan Concordia [’22] cracking a joke, Peyton Gessel [’22] making sure everyone is doing well, or Cate Vickery [’22] keeping everyone on task.”

Gisell, one of the team’s two captains, mentioned other vital contributors: “Paloma Tellez [’22] brings a lot of energy towards the team as far as always trying her best and putting in work. Nora Smith [’24] is also super on task and willing to do anything; she’s super positive about everything.”

JV co-captain Koko Chen ’23 said of her counterpart Kali Tembo ’23, “Kali is one of the more energetic and supportive players in the team, always bringing a positive attitude.”

The coaches also play an essential role in the team’s chemistry and success. Titus stated, “I always feel comfortable going to our coaches whenever I have a problem because I know both Coach Pixler and Coach Shoenberger care about us not only on but off the field. So far we’ve done pretty well in our games.”

Chen also talked about the JV coaches, stating, “We are doing well this year with Todd McGuire’s adjustments to the formation to fit our individual skills and maximize our strengths.”

Overall the soccer team is a welcoming bunch, with many memories made and many more to come.

Gisell stated, “My favorite moment this season was probably when we were down in our home game against Musselman where we ended up coming back and winning by more than one goal.”

With excellent team chemistry and a strong bond among everyone in the program, the success of the teams is sure to follow.