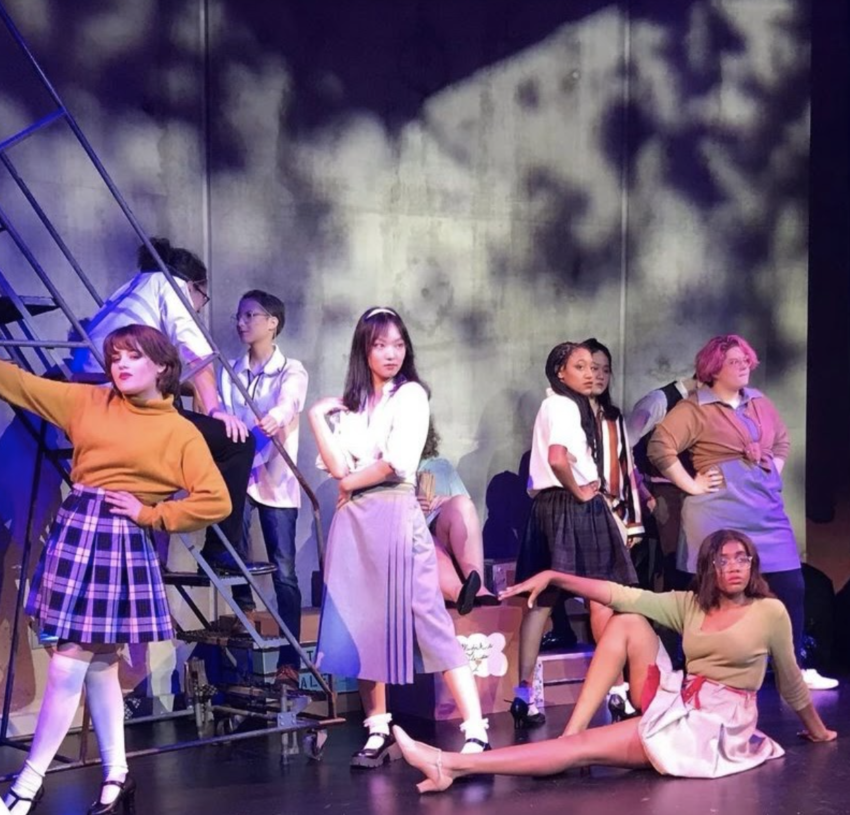 As Halloween neared, the cast and crew of Stony Batter presented the fruits (pun intended) of their labor in the musical production Little Shop of Horrors, in which a hapless florist shop worker raises a plant that feeds on human blood and flesh.

The Stony Batter Players presented several performances in a leadup to their finale midnight show on Halloween.  Lead actor Frances Elwood ’23 who played orphan-turned-botanist Seymour Krelborn said, “I enjoyed a lot working as a cast member of the musical. The crew and the cast were such a great group: Ellie Miller ’23 is a saint, Cecilia Wang ’25 is the sweetest. I could sing praises for everyone in the cast all day long.”

Damien Dowling ’23, who embodied the evil carnivorous plant Audrey 2, added, “Performing in front of a huge audience was pretty nerve racking but so much fun. My favorite part though, was all the laughs we garnered. It was really great to know that the audience was engaged.”

Kelly Dowling, director and Chair of the Arts Department, discussed her inspiration. “The first thing whenever you’re designing for a play is to kind of decide where and when, so we decided on 1962 because the original movie was filmed in 1959 moving into the 1960s, so 1962 felt like a good time. And once we picked a time period,  I just started digging through historical pictures and looking for things to reference. Since the movie kind of has a sci-fi and comedic feel, I wanted to look at different inspirations that way.

Dowling continued, “And also I like to know a little bit about the person who wrote the show and Howard Ashman actually grew up in Baltimore, which is where I worked before I came here. And the area where my theatre company was, it was actually where he grew up, and there was a very famous drag queen there called Divine, and she actually inspired Ursula from the Little Mermaid. And so I really wanted to incorporate that into the plant, and so that is what sets apart our production from the original production and what makes our version unique.”

Many Mercersburg students attended the musical. Yael Hochberg ’25 spoke about her experience. “I thought the play was really good, the actors could have been a little bit more in sync and they could’ve projected more but considering that there was seating on both sides of the room they did really well. The midnight show was great but the actors were kind of tired but that is to be expected for people performing at midnight. However, even after considering all of this, the play was amazing.”

Tech Crew member Arpi Karapetyan ’24 had this to say about the difficult but also enjoyable moments she had: “I think the hours are the most challenging part, because almost every day, we were there from 5:30 until like nine or ten, and some days we had to be there for the entire day and it’s just really exhausting, just being there for so long just constantly rehearsing. Some of the things I enjoyed were meeting new people and getting closer to them, and during opening night, we just all had this moment, we all got together and we were all just really happy and excited and just as a group, we’re just very happy with what happened.”

Cast and crew worked hard day in and day out for months constantly rehearsing, constructing sets, and pushing through their hardships to present the Mercersburg Academy community with this original rendition of a true classic.