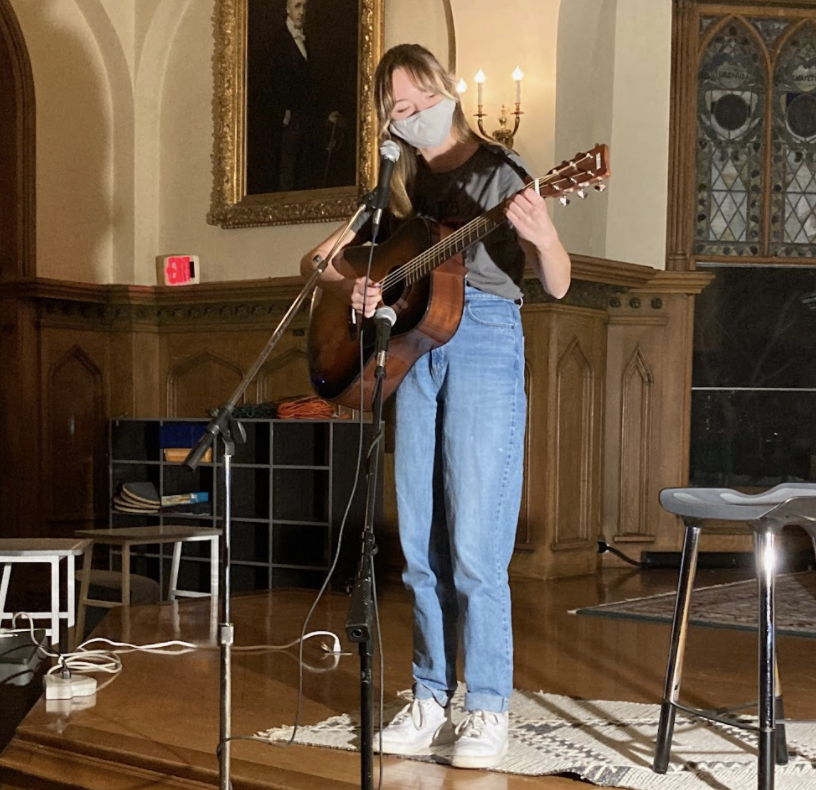 Last weekend, the Spoken Word and Creative Cafe took place in the Edwards Room. Spoken Word is a beloved campus tradition in which once a term the student body can gather to see their classmates perform music and poetry.

English teacher Michele Poacelli has organized the event for five years and counting. Finn Sipes ‘22 and Mel Cort ‘23, the two students running Spoken Word, say that the event could not have happened without the work Poacelli puts into organizing the performance lineup. Poacelli said, “We get to know the hidden talents of the people around us, and we’re richly entertained by them.”

Spoken Word is only made possible by its performers and there were a variety of different performances from Alice Hwang’s ‘22 beautiful rendition of Adele, to Pete Curtis’s ‘22 heartfelt poetry, to Vivian Willoughby’s ‘25 horror fiction. Each performance style requires special preparation; musical performers tend to put more time into practicing than others. Anne Sehon ‘25 offered both a poem and a song. She said, “I practiced for a while, probably twice a day, for my song. For my poem, I really just went up there and spoke.”

Pete Curtis ‘22 took the stage for his first time with a personal, original poem. He said, “The performance was really nerve wracking, especially in front of my friends and teachers. But, once I got up there and started speaking, the nerves kind of melted away.”

Several performers had to spend a few seconds or more wrestling the mics into behaving, but this only gave the audience more of an opportunity to voice their support for their classmates and friends. Whenever a performer hit a snag, the audience was always ready to cheer them on. The vibe of Spoken Word, as ever, was unparalleled with its beautiful lighting and positive atmosphere.

Spoken Word will return in the spring term. Poacelli hopes the event will be held outside, weather permitting. She explained that the fairy lights and blazing fire enhance the outdoor Spoken Word experience. As for the future of Spoken Word, Poacelli said, “I hope that every student, and especially seniors, see it as a ‘bucket list’ event. I think everyone should put themselves out there and have their moment in the spotlight. I admire the people who do. It’s an incredible act of courage, and it never goes unrecognized.” Spring Spoken Word will definitely be one to mark on your calendars!