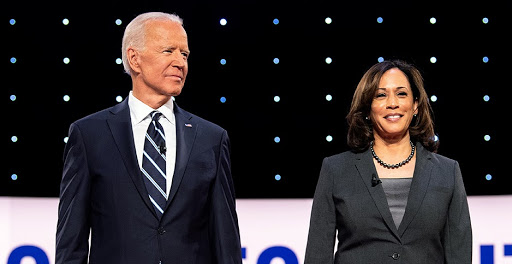 Recently, I saw a Joe Biden ad on YouTube that said, “Joe’s healthcare plan: more choices, lower cost.” But what does that even mean? How much does Biden want to socialize healthcare? Does “more choices” mean he wants to offer both public and private healthcare, sort of like the public/private school system? Wouldn’t that just cause costs to be higher? Truly, I have no idea. And I think that’s both the major strength and failing of the Biden-Harris campaign: I have absolutely no idea what they stand for.

As someone who’s fairly invested in politics, I’d like to think that I have some semblance of an idea what candidates represent. However, for the Biden-Harris campaign, all I really know is that they’re very moderate. This moderate energy is, again, both a strength and a weakness for the campaign. On one hand, Biden paints himself as a healer, someone who wants to bring America together, not polarize it further. This is in direct opposition to Trump, who not only encourages division, but thrives on it. On the other hand, Trump is somewhat accurate in calling Joe Biden “Sleepy Joe.” Biden’s low energy can make listening to his speeches and addresses quite uninteresting. Of course, Trump’s inflammatory language, while certainly more interesting, isn’t the speech of a healer or politician. It is the speech of a schoolyard bully who knows that he’ll get attention by annoying his classmates and teacher. It is the speech of someone who encourages scandals, welcomes them, because he knows he can use them to his advantage. Now, if Biden were to have the same level and type of energy as Trump, the election would be even more chaotic and destructive than it already is. Biden is a healer, he’s moderate, and although he can be uninteresting at times, he’s an important foil to the bombast of Trump.

Speaking of foils, Trump and Biden are almost perfect foils, not in policy, but in character. Trump is chaotic, Biden is calm. Trump will “run the country like a business,” while Biden prides himself on his integrity. In policy, however, they’re not as dissimilar as I would hope. Neither supports single-payer universal healthcare, something that I passionately believe is necessary for the future. Both have been integral in the defense of racist policies (Biden’s opposition of federally-mandated busing in the 1970s comes to mind). Of course, there are some major differences, and I’m not advocating for people—especially young people—to throw away their vote because Biden isn’t a great candidate; I do think Biden deserves some criticism, just as I think it’s necessary to analyze and criticize anything I support. Pure adulation is not only useless but also dangerous. There is no chance of improvement for the nation if we only choose to praise and not critique. The world would be stagnant. However, pure criticism, too, is useless. And there certainly are things I think the Biden-Harris campaign is doing well. For instance, I think that Harris, although not my first pick, is a great VP for Biden. She has name recognition, she is a great debater, and she brings an energy to the campaign that it sorely needed. Plus, Biden’s healer-mentality is clearly necessary in our epoch of polarization. I might not know exactly what he wants, but I do know he cares. Compared to Trump, that’s a major step up.

And so, while I may not agree with Biden on many policies nor think he’s the best possible leader for our times, I do think he gives America a chance to step back from the chaos of the current administration. That may be our best chance to preserve democracy.