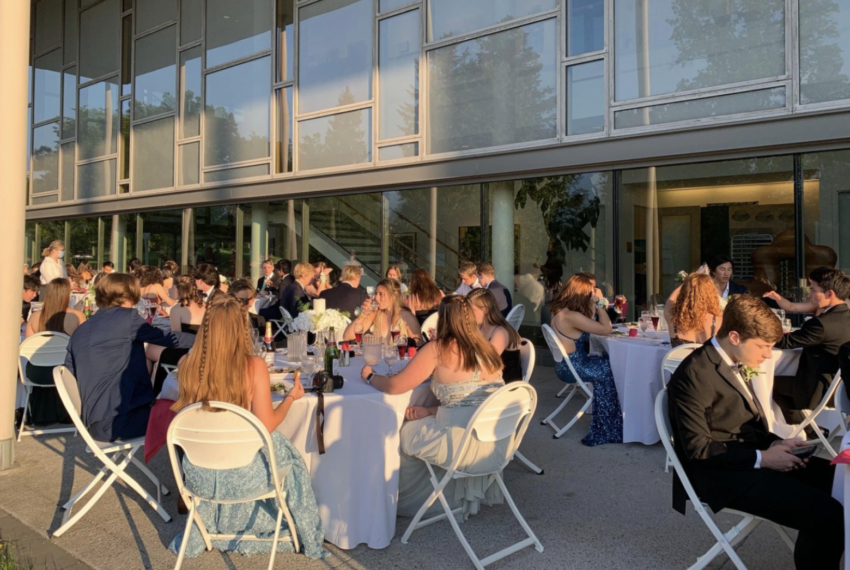 COVID-19 has changed the lives of everyone around the world. However, certain changes are noticably present on the small campus of Mercersburg Academy. Several decades-old traditions have been sacrificed and/or modified in the name of keeping the students safe and healthy. One of those cherished traditions is prom. Unfortunately, prom was canceled last year because of how suddenly COVID-19 took a hold of our lives. Because of this, there was even more pressure on the prom committee to make this year’s prom one to remember.

In past years, upper-class students were invited to the prom, and any junior or upper-middler invited by an upper-class student. However, “This year tenth graders were originally not allowed to be invited by upperclassmen, which has been a part of prom for years. After some negotiation and compromise, tenth graders were allowed to attend the dance portion of the event due to COVID restrictions only applying to the dinner,” said Jordyn Beard ‘21, a member of the prom committee. Even with this compromise, no juniors were allowed to attend any portion of prom, even if they were to be invited by an upperclassman.

When asked about the event year Trini Hoffman, Director of Student Activities, said, “There was really not much different about the prom this year. We have had proms outside before. We have had dinner on the porch of the Burgin and the dance in tents before.” The only change was that “we had no choice about the prom being outside” due to COVID-19. Luckily the weather held up beautifully. Afternoon rain showers gave way to a stunning golden hour in the Boys Garden, perfect for photos.

With the students the outdoor venue was a hit; however, Virginia Jones ‘21 observed, “Walking up hills was probably the only negative” of the evening. “The lack of a walkway was frustrating, as most girls were either barefoot or in heels. Walking through the grass in a dress that touches the floor is a no-go for most women, which seems to have been disregarded,” said Jordyn Beard ‘21, who was seen barefoot no more than an hour into the evening along with several others.

In previous years when prom was held indoors, you could find students stepping outside for a reprieve from the humid dance floor. The outdoor venue allowed students to step away from the main dance group to cool down, while not being forced to leave the dance entirely. Jack Quagliaroli ‘22 said, “Overall, with what we were dealt we had the best prom we could’ve. Everybody was upset about the lack of after prom but other than that it was pretty quality.”

The music, on the other hand, was, as one student put it, “lacking in variety” and repetitive. There were many people disappointed in the limited number of slow songs played since “Proms are notorious for their cheesy slow dances,” said Beard.

As the evening slowed and came to an end, dates could be seen cozying up with one another on the benches outside the tent. At the end of the night, Hoffman said she felt that the students were “appreciative of the hard work that everyone put in to make it an enjoyable event.”