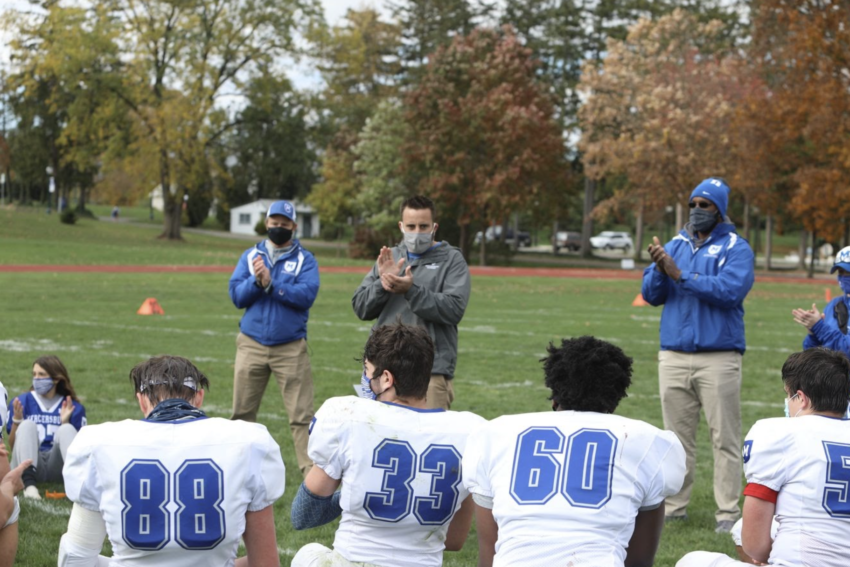 Since the 2021-22 school year began, Mercersburg athletes have traveled to a variety of schools to take part in interscholastic competitions. One notable recent event was the football scrimmage that took place on September 11. The eight man Mercersburg football team traveled to The Perkiomen School to compete in scrimmages with three other teams: The Perkiomen School, Valley Forge Military Academy, and Delaware County Christian School.

This being the first football trip since the beginning of the COVID pandemic, it is safe to say that the team was thrilled to participate. Christian Jetter ‘22 said, “I am excited and ready for the new season.” Samuel Zhao ’24, a rookie who had just joined the team, said, “I felt a little bit nervous since it was my first football game,” but he noted that he was also very excited.

Given the time since their last competitive coaching venture two years ago, the coaches weren’t overly preoccupied with winning each the scrimmage. Andy Brown, head football coach, said, “The goal was to allow our players to play against other teams and to learn in a game-like scenario. We were fortunate to get everyone playing time in the scrimmage and to get film to help teach and fix any mistakes.”

Similarly, coach Bryan Morgan said, “We wanted to see how our players competed against another opponent. We wanted them to play with energy and to have fun. A good chunk of our players have never played before so it was their first taste of football.”

Many players felt satisfied with the experience. Jetter said, “It was great to play football again with other schools and was also nice to see some new young players on our team making good plays.” Both Zhao and Orhan Abalioglu ‘24, being new to the team, said that it was a great experience as rookies and that they especially enjoyed the bus ride.

The coaches were very satisfied with the experience as well. Morgan said, “Our team played well. There was no lack of enthusiasm. We learned what we had to work on as individuals and as a team.” Brown added, “It was a great experience and helped us prepare for our win in the first game.”  On September 18, the official season opened against Valley Forge Military Academy and the Storm emerged victorious, 42-28.

This season is off to a positive start and there is a lot to watch from the team. It is already filled with optimism and excitement, but there is also much to prove and learn. The team has a withstanding principle: celebrate the team’s successes for 24 hours and then the hard work continues.